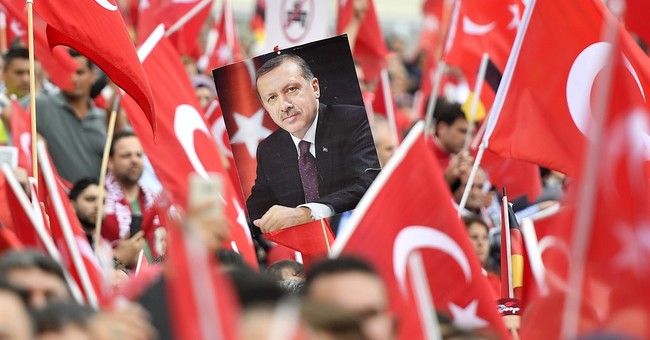 Germany is clashing with Turkey over its lack of support for the Turkish government’s violent quashing of an attempted coup in July.

More than 30,000 people gathered in Cologne, Germany in support of Turkish President Recep Tayyip Erdogan on July 31. A German court had ruled Erdogan and other top Turkish officials were banned from appearing at the rally via satellite video, angering the pro-Erdogan crowd.

Erdogan has arrested or fired from their jobs tens of thousands of Turkish citizens in suspicion of involvement with July’s coup attempt. However, he and his supporters still maintain that they are pro-democracy and that Germany stifled the free speech rights of the protesters.

“We are here because our compatriots in Germany are standing up for democracy and against the attempted military coup,” Turkey’s sports minister said, referring to the Turks who had gathered at the rally.

Erdogan had stronger words Tuesday as the two countries’ relationships frayed further. The government had summoned the German ambassador in Ankara on Monday.

“The West is supporting terrorism and taking sides with coups,” the president said, according to Associated Press. “Those we considered friends are siding with coup-plotters and terrorists.”

Erdogan was also critical of Germany, France and Belgium for not visiting Turkey following the failed coup, saying that foreign diplomats have visited the other countries to offer condolences after recent terror attacks.

Tensions flared further as Turkish officials threatened to back out of its migrant deal with the European Union. Germany had been spearheading talks with Turkey to potentially join the EU, provided Turkey staunched the flow of migrants flooding onto the continent.

“The [March] deal has been highly effective, leading to a sharp drop in the numbers of migrants arriving in Greece and easing the pressure on Angela Merkel, the German chancellor, for whom the influx of asylum-seekers into Germany last year turned into a big political headache,” Financial Times analyzed.

One of the biggest negotiations on the table is visa-free travel between Turkey and the European Union. But Germany might axe that concession following Turkey’s oppressive crackdown. In response, Turkey’s foreign minister threatened to “renounce” the deal.

“It’s up to Turkey whether there can be [a] visa-free regime or not,” Germany’s deputy chancellor said. “Germany and Europe should under no circumstances be blackmailed.”

It is estimated more than three million people of Turkish origin live in Germany, many of them pro-Erdogan.