Should Radical Islamists Have Freedom Of Expression? Bangladesh Just Answered In A Big Way. 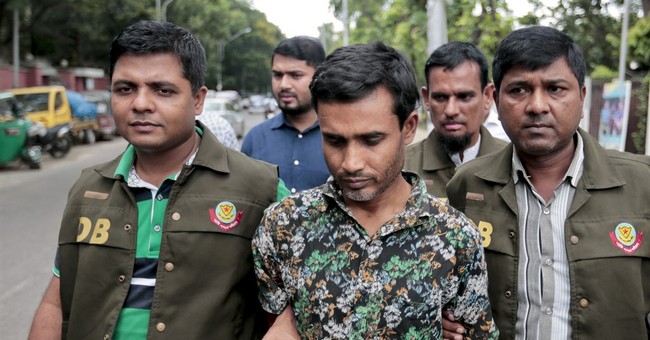 Police in Bangladesh have arrested more than 5,000 people since Friday in a massive effort to crack down on the growing number of attacks against minorities and academics in the country.

Bangladesh, which has a large population of moderate Sunni Muslims, has been wracked with brutal stabbings and machete attacks thought to be carried out by extremist Islamic militants. Victims in recent months have included religious minorities, secular bloggers, university professors, foreign aid workers and gay rights activists.

News outlets offered conflicting numbers of arrested criminals; some, such as Wall Street Journal, reported as many as 8,500 people were thrown in jail over the weekend. Agence France-Presse quoted a Bangladeshi police spokesman that 3,245 people were arrested in the last 24 hours. Of these thousands, 120 of them were suspected Islamic extremists; the rest were petty criminals.

"If they think they could turn Bangladesh upside down, they are wrong," she said. "They will be exposed to justice in the soil of Bangladesh and their patrons will also not be spared."

Despite these seemingly impressive strides, critics of the Bangladesh government said this string of arrests raises questions about the effectiveness of such widespread punitive measures.

The International Crisis Group said the arrests—done without due process or transparency— are “fueling alienation that these groups can further exploit.” The organization continued:

“By concentrating on targeting the opposition, the police are failing to curb criminality; the prisons are overburdened by the mass arrests of opposition leaders and activists; and the judiciary, perceived as partisan for trials and sentences based on political grounds, is losing credibility.”

There is also debate as to the identity of the militants. Al Qaeda or the Islamic State of Iraq and Syria have claimed responsibility for the majority of the attacks, but the government insists that the assailants are simply members of Bangladeshi political opposition parties or local terror groups without connections to the extremist organizations.

“It’s physically impossible for an organization that is Iraq- or Syria-based to go somewhere so far away and launch operations,” agrees Kamran Bokhari, a South Asia expert from George Washington University. Bangladesh is located east of India.

Of course, a harsh stance against Islamic extremism is necessary—we have seen this weekend in Orlando how radical Islamism can fuel hateful killings of minorities. However, Bangladesh must be careful not to infringe on civil liberties like free expression. If, as critics charge, those arrested were simply members of opposition parties rounded up without due process or probable cause, terrorists will continue to lash out against the repressive regime.