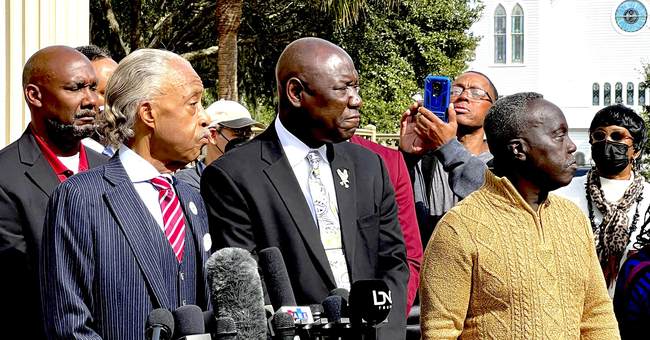 Marcus Arbery, father of Ahmaud Arbery, gave an inspiring speech to media after his son's killers were found guilty of murder on Wednesday. However, race-hustlers Al Sharpton and Ben Crump, who were both standing behind the grieving father, appeared to take steps to wrap it up soon after Arbery's use of the words - gasp - "all lives matter."

Notice Ben Crump and Al Sharpton trying to get him off the mic when he says this. https://t.co/9hIZP0npEH

After almost 11 hours of jury deliberations, Travis McMichael, Greg McMichael, William "Roddie" Bryan were all found guilty of felony murder in the death of Arbery, a 25-year-old black man who was jogging in their neighborhood when he was confronted by the trio.

It was a great speech and something 'all lives' should be able to agree on, obviously. But unfortunately, as we all know, using the words "all lives matter" is a big no-no to leftist elites.

Crump, who represents Marcus Arbery, and Sharpton, who can be seen anywhere he can possibly get a camera pointed in his direction, both appeared more than ready for the grieving father's speech to stop. Crump can be seen in the video putting his hand over his face and leaning behind Arbery to speak to someone, then gently putting his hands on Arbery as if to say, 'let's wrap it up.' Then, at the end of the video above, the pair gave each other a quick, seemingly meaningful nod.

The video below shows the rest of the speech, with Crump giving Arbery some polite "Amens" before thanking him and attempting to 'whisk' him away from the microphone.

I mean, if people start actually saying and believing that "all lives matter," race hustlers might find it more difficult to race hustle. And we can't have that, now can we?