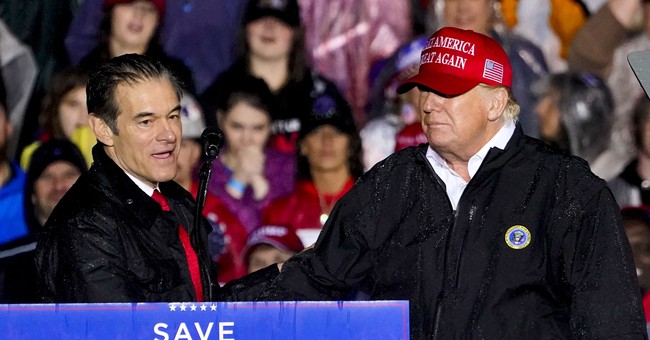 As recounting began in the too-soon-to-call Republican primary for the U.S. Senate in Pennsylvania, Dr. Mehmet Oz is claiming “presumptive" victory in the race, calling it a “tough campaign.”

With just over 900 votes separating Oz and his opponent David McCormick, Oz released a campaign-style “Thank You” video addressed to voters who support him.

”I am blessed to have earned the presumptive Republican nomination for the United States Senate,” while also vowing to unify the Republican Party.

Oz, who was endorsed by President Trump is confident he will not disappoint Americans, giving hope that the nation's future looks bright with more freedom and less government.

It's time to unite. I want to hear your ideas and make this country’s future as bright as it has ever been. With more freedom, less big government, and by empowering our people, America’s light will shine brighter than ever. pic.twitter.com/yWK5VhCk8P

Contrary to Oz, McCormick is not fully convinced he has yet to lose.

In a statement, McCormick said “we are proud our campaign received nearly 418,000 votes, won 37 of 67 counties, and contributed to a historic turnout with a razor-thin difference between myself and Mehmet Oz…this narrow difference triggers an automatic recount, and we look forward to a swift resolution so our party can unite to defeat socialist John Fetterman in the fall.”

Votes from the second recount is due on June 7. With thousands of mail-in ballots, absentee, and provisional ballots left to consider, it could be enough to sway the election outcome in favor of McCormick.