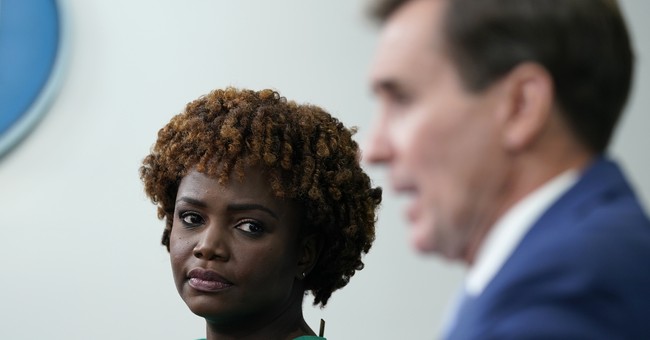 This piece has been updated to include a statement from House Minority Leader Kevin McCarthy (R-CA)'s office and a Republican leadership aide.

Wednesday was very much an abortion-minded day for the Biden administration. It was announced earlier that President Joe Biden would sign an executive order, which he did, dictating Medicaid funds will be provided for low-income women seeking to travel to other states for an abortion. The executive order was also discussed at the first meeting of the Interagency Task Force on Reproductive Healthcare Access, where he signed it.

During that day's press briefing, White House Press Secretary Karine Jean-Pierre had a particularly bad day, most notably on the abortion issue. She not only claimed that it was "unconstitutional" for the U.S. Supreme Court to have overturned Roe v. Wade with its Dobbs v. Jackson decision in June, but raised some very real concerns about the nature of this executive order.

Reporter: "How will you be able to pay, to help women pay, to cross a state line" to get an abortion "given the restrictions of the Hyde Amendment?"

Jean-Pierre: "That is something that HHS will come up with the details on that..."

Reporter: "But you're about to sign an EO..." pic.twitter.com/0CTQjk4X1i

Jean-Pierre was pressed by a reporter as to how the administration will be able to go about the order, given the restrictions of the Hyde Amendment, which bars federal funding from going towards paying for abortions except in instances of rape, incest, or when the life of the mother is at risk. Despite the executive order coming down that very day, Jean-Pierre could only respond that they were leaving it up to the Department of Health & Human Services (HHS). "That's going to be in their purview," she said.

Despite Jean-Pierre's claims that the president is doing "whatever is legally possible," few assurances were given that this order will actually be in line with Hyde.

"There is no ‘figuring it out’ when it comes to the Hyde Amendment. It bans federal funding for abortion procedures," said Sen. Roger Wicker (R-MS) in a statement to Townhall about such remarks. "I expect any attempt by the Biden Administration to circumvent the law will be met with a strong and unified response from pro-life legislators."

Before exiting the podium, Jean-Pierre also engaged in one final back-and-forth about the executive order.

Reporter: "Why does the president want to force pro-life Americans, including Catholics, of which he is one, to subsidize abortions?" pic.twitter.com/aSgD2goAkm

The reporter pressed her for clarification as to if the order would violate Hyde. "On the Medicaid--on the proposal to have Medicaid fund travel expenses for women seeking abortion, how would that not violate Hyde if it’s using taxpayer dollars to pay for abortions," he asked.

Jean-Pierre simply responded that it "does not--will not--will not violate the Hyde Amendment," adding "it is law, and we follow the law here."

Wednesday's preoccupation with abortion is not the first and only time the Biden administration has led many to fear Hyde is at stake. Biden and pro-abortion Democrats fought to keep it out of the budget that was introduced last year, though it ultimately prevailed. Seeming to have not learned his lesson, Biden introduced a budget proposal this year that also left out Hyde.

It has more recently been Biden's reaction to the Dobbs decision that has raised concerns. Last month, Sen. Marco Rubio (R-FL) sent a letter to Office of Personnel Management (OPM) Director Kiran Ahuja expressing his concern that the Hyde Amendment is being violated.

In light of Wednesday's concerns, the senator warned in a statement to Townhall that this is not a surprising move from the president.

"Abortion is not medical care, which is why it is against federal law to use taxpayer dollars to end the life of an unborn child. This is not the first time President Biden has attempted to violate the law and it will, unfortunately, not be the last. I will do everything possible to hold him accountable and protect the lives of unborn Americans," Rubio said.

Sen. Steve Daines (R-MT), the founder and chairman of the Senate Pro-Life Caucus, similarly stood up for the Hyde Amendment, while warning about the Biden administration's track record.

"The Hyde Amendment has been the law of the land for over 45 years, and at every turn, the Biden administration has been working to skirt this long-standing law. There is no question about it—using taxpayer dollars to fund abortion tourism is unacceptable, it’s illegal, and it goes against our nation’s values," he said in a statement for Townhall.

Republicans are also willing to protect Hyde should pro-abortion Democrats at the congressional level continue their crusade to get rid of it. In June, Daines and 47 other Republican senators sent a letter to Senate Majority Leader Chuck Schumer (D-NY) that they remained prepared to block any bill that undermines Hyde.

House Republicans are also promising action. In a statement for Townhall, Chad Gilmartin, the deputy spokesperson for House Minority Leader Kevin McCarthy (R-CA) assured that "Leader McCarthy and all House Republicans stand for life and will continue to hold the Biden administration accountable. The American people do not support the radical abortion-on-demand up until the moment of birth position President Biden and House Democrats share. Biden must respect the Hyde Amendment, which has long enjoyed bipartisan support, and abandon any idea to have taxpayers fund abortions."

At the end of the day, such an executive order may be moot, as pro-life opposition remains vigilant. A Republican leadership aide told Townhall that "President Biden’s recent Executive Order lacked any concrete actions that the Administration intends to take, but House Republicans will be closely monitoring any action by the Administration."

"The Hyde Amendment" was trending on Twitter on Wednesday night, as a result of the press briefing, with many pointing out that this order doesn't sound in line so much with the Hyde Amendment.

As Twitter explained about the trend, "The Hyde Amendment, a federal law prohibiting federal government money from being spent on abortion except in cases of incest, rape or to save the pregnant person’s life, is discussed following President Biden’s executive order helping low-income people cover the cost of traveling for the procedure" using the woke term of "pregnant person" and stopping short of mentioning the concerns that Biden's executive order violates Hyde.