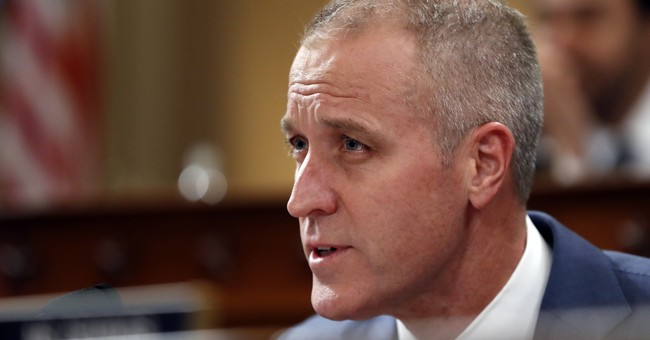 It's no secret that the Democratic Congressional Campaign Committee (DCCC) is pretty desperate this election cycle, given they have the thankless and particularly difficult task of holding onto their narrow majority in the U.S. House of Representatives. Given that Republicans are forecast to regain control of the House, to the tune of 25-35 seats, it's no wonder that the DCCC is pulling out whatever stops it can. That includes boosting Republican candidates in the primaries, as they think such candidates are easier to beat.

"Gibbs is a far-right extremist" which is why we elected him pic.twitter.com/SOK5VuebY6

No more was that clearly on display than perhaps Michigan's 3rd Congressional District, where Trump-backed primary challenger John Gibbs beat Rep. Peter Meijer (R-MI), who had voted to impeach the former president. Reports indicate that the DCCC spent around $435,000 on ads boosting Gibbs. Now that he's actually won, though, the DCCC is making different claims about Tuesday's primary race.

The race was called in the early morning hours of Wednesday. Later that day, though, as Madeline Fry Schultz tweeted out, the DCCC had put out a press release, "The Case Against John Gibbs."

The confusingly organized press release features a memo from Matt Corridoni, the midwest press secretary for the DCCC. "After a nasty and hotly contested Republican primary, voters delivered an upset to Rep. Peter Meijer and ousted him before the end of his first term in office," the memo begins by claiming. It later goes on to claim that "John Gibbs is a far-right extremist who was carried over the finish line in his primary only by the most fringe elements of his party."

Such phrasing is a rather selective interpretation of the primary race, considering that the DCCC meddled in it in such a way that caused disunity and threw their members in disarray. There's no mention of such meddling though, as the DCCC appears to trick voters into believing that they didn't hope and pray for this "upset" and that he was "carried over the finish line in his primary only by most fringe elements of his party," not with financial help from the very organization that put out this memo.

Amusingly enough, the memo also includes reporting from POLITICO last month to pile on Gibbs over, neglecting to mention how POLITICO later that same month published a particularly damning article highlighting the disunity at the DCCC and how fellow Democrats are chafing under the leadership of Rep. Sean Patrick Maloney (D-NY) who has the thankless task of leading the organization.

The disunity and disarray is not merely over the DCCC's decision to spend funds, funded in part by members' leadership dues, though that's certainly party of it. In addition to concerns over morals and values raised by some members, Rep. Pramila Jaypal (D-WA) also expressed concerns and drew similarities to Trump winning in 2016, despite being perceived as the easiest Republican to beat.

The DCCC had boosted Gibbs, not only despite their warnings that he "repeatedly pushed the Big Lie that the election was stolen and downplayed the deadly violence at the Capitol on January 6th, and he wouldn’t hesitate to silence Michigan voters should he not like the results of the election," but because of them, as they considered Gibbs easier than Meijer to defeat in the general election.

Again, there's no mention of this in the memo. Rather, the memo brags about how much of an advantage the Democratic nominee, Hillary Scholten, supposedly has. "After redistricting, this district moved from a Trump +3 district to a Biden +9 – a twelve-point swing that makes this a prime pickup opportunity for Democrats across the entire House battlefield," the memo reads sat one point.

If Democrats had such an advantage in this race, then, it's worth wondering why they were so intent on making sure the candidate believed to be easier to beat won his primary.

Cook Political Report now considers the race to "Lean Democratic," with Corridoni gleefully retweeting Dave Wasserman when it comes to such a change. The race had been considered a "Toss-Up."

Wasserman had also tweeted, when Rep. Meijer was briefly ahead late on Tuesday night, about the DCCC's involvement in the race.

We'll never know, but it's possible last-minute DCCC meddling in #MI03 actually backfired by making it clear to GOP primary voters which R Dems preferred to face in November (Gibbs would have been an underdog in this Biden +8 seat).

Decision Desk HQ still considers the race to be a "Toss-Up," and one which slightly favors Gibbs. AnneMarie Schieber, who handles media relations for the Gibbs for Congress campaign, provided a statement for Townhall for a previous article of mine about the race, in which she took issue with such claims that Gibbs is easier to beat.

"Our polls showed that Meijer could not have beaten the Democrat because the grass roots would not supported him in the general. So the idea that the Dems believe Gibbs would have been easier to beat is preposterous," Schieber had said. "Gibbs is running as a common sense candidate who will have broad appeal to a wide swath of voters who are frustrated by inflation, supply chain disruptions, rising crime and election meddling. Gibbs won’t have to defend Biden’s disastrous policies like his opponent.  We look forward to another victory."