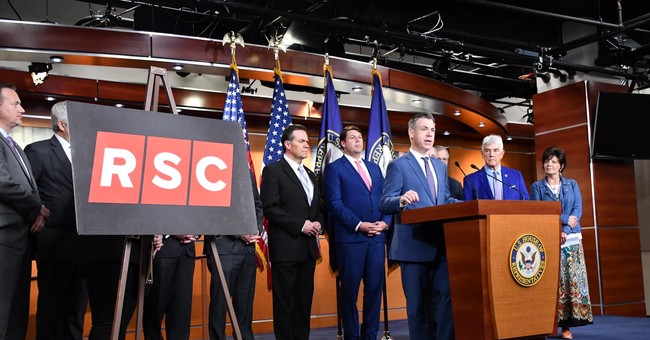 On Wednesday, Republican lawmakers will introduce the Protecting Minors from Medical Malpractice Act in both chambers that would provide relief for those who were subject to gender-transformation procedures as minors who cannot legally consent. The legislation comes from Rep. Jim Banks (R-IN), who chairs the Republican Study Committee (RSC), and Rep. Doug LaMalfa (R-CA). Sen. Tom Cotton (R-AR) will introduce the legislation in the U.S. Senate as well.

A major component of the bill allows for individuals who went through such transitions as minors to seek justice in court by suing the medical practitioner who performed such a procedure, applicable after the date of passage of such legislation, with a 30-year statute of limitation after the age of majority. Applicable procedures include "puberty blockers, cross-sex hormones, and surgical procedures that change an individual’s body in order to align with an identity at odds with an individual’s biological sex," as mentioned in a press release from the RSC.

In a statement, Rep. Banks did not shy away from calling out the Biden administration. "The Biden administration released official guidance recommending irreversible and life-altering surgery for minors too young to apply for a learner’s permit. These procedure lack any solid evidence and have been rejected by public health agencies around the world," he said. "Ten years from now, there will be hundreds of thousands of Americans who were permanently scarred by the radical left’s agenda before they reached adulthood. If Democrats truly supported gender-confused children, they’d support our effort to give them legal recourse."

Rep. LaMalfa spoke to the merits of the language. "Radical gender changing ideologies ignore scientific evidence and put children in harm’s way. Every time a doctor performs a gender-transitioning procedure on a minor, they endanger a vulnerable child, potentially sterilize them for life, and break their oath to 'do no harm,' he said. "I’m pleased to join in spearheading this legislation which will ensure a private right of action for minors who are subject to these experimental procedures and ensure that the federal government cannot force a medical practitioner to perform these procedures."

Such legislation is necessary as the White House is looking to get rid of conscience protections when it comes to a plan from the Department of Health & Human Services (HHS) to do away with a rule introduced from the Trump administration. If implemented, the rule would have offered conscience protections from those opposed to performing transgender surgeries, among other procedures, such as abortion.

In a White House "fact sheet" from March 31, HHS also communicated support for taxpayer funded gender-transitions, including for minors. "The Office of the Assistant Secretary for Health has developed a resource to inform parents and guardians, educators, and other persons supporting children and adolescents with information on what is gender-affirming care and why it is important to transgender, nonbinary, and other gender expansive young people’s well-being," it said.

The White House has also come out in strong support of gender-transition for minors from the start, claiming it is so-called "gender-affirming care." As Sarah highlighted last week, the president even signed an executive order that will crack down on conversion therapy, require the Department of Education to release guidelines on school policies, direct HHS to give states guidance on how to expand access to what it deems healthcare for LGBT patients, and address barriers that LGBT parents and children face in foster care.

When it comes to the Education Department, Rep. Banks asked but did not receive a sufficient answer from the Education Secretary Miguel Cardona during a committee hearing last month as to if he supported schools keeping students' gender-transitions from parents.

As I highlighted in an exclusive first look preview earlier this month, the RSC budget proposal includes support for multiple bills from members protecting children from the transgender woke agenda.