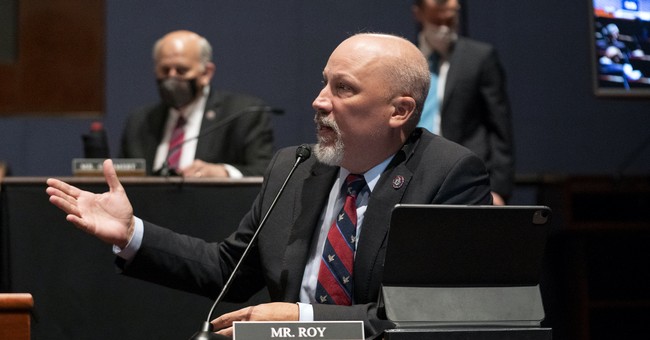 The House Judiciary Committee held a hearing on "Revoking Your Rights: The Ongoing Crisis in Abortion Care Access" on Wednesday. The remarks from pro-abortion members and the witnesses called by Democrats were just as absurd as the title of the hearing.

As Rep. Chip Roy (R-TX) questioned one of the witnesses, Dr. Yashica Robinson, who performs abortions, he had great difficulty getting out of her how late into a pregnancy she has performed abortions, and then she turned back to accuse him of using "inflammatory language."

"So, unfortunately, my state [of Alabama] is one of those states that has passed restrictions or bans on abortion care, which limits physicians like myself," Dr. Robinson said as part of her non-answer. Rep. Roy cut in to point out that "in other words, you'd like to do it later," before asking her once more what the latest is that she's performed an abortion.

Current state law in Alabama has restricted abortions past 20-weeks, the halfway point in pregnancy, at which point an unborn child can feel pain and has been able to for weeks already.

To comply with the law, while still performing abortions as late as legally possible, Dr. Robinson does perform abortions up to 20-weeks gestation.

Once more, Dr. Robinson deflected. Rather than answer the question, she editorialized to lament about the line of questioning Republicans dared to impose on her.

"One of the things that you all have done, throughout this hearing, is just use inflammatory language to talk about the care that we provide," Dr. Robinson charged as Rep. Roy tried to steer her back toward the question asked of her.

"Have you had human parts, human baby parts, arms, legs, as a result of an abortion performed at the time you just acknowledged you performed them?"

Dr. Robinson still would not answer the question, though, as she shook her head and declared she was "a proud abortion provider" and "there is nothing you can say to me that makes it difficult to talk about the care that I provide." Nothing, however, except for the truth when asked a direct question. She then tried to reframe how Rep. Roy would ask the question, but he held strong.

Though Rep. Roy's time had expired, Dr. Robinson claimed, "All of those things that you just mentioned, I have never seen that in a healthcare setting, ever." Chillingly, there was not enough time for her to respond to Rep. Roy's question about where the remains go.

The procedure is also explained by AbortionProcedures.com, a project of Live Action and Dr. Anthony Levatino, who used to perform such abortions.

The 2015 videos Rep. Roy was referring to were part of a project from the Center for Medical Progress (CMP) that showed Planned Parenthood illegally harvesting aborted baby parts. Roy was the First Assistant Attorney General of Texas at the time.

Dr. Robinson was hardly the only infuriating witness. Another witness called by Democrats included Ms. Aimee Arrambide, the executive director of Avow Texas, who claimed in her testimony that "[her] abortion saved [her] life" and declared to the committee that she uses "she/her pronouns."

She was asked by Rep. Dan Bishop (R-NC) what a woman is, to which she responded, "I believe that everyone can identify for themselves." When asked if men can become pregnant and have abortions, Arrambide answered, "Yes."