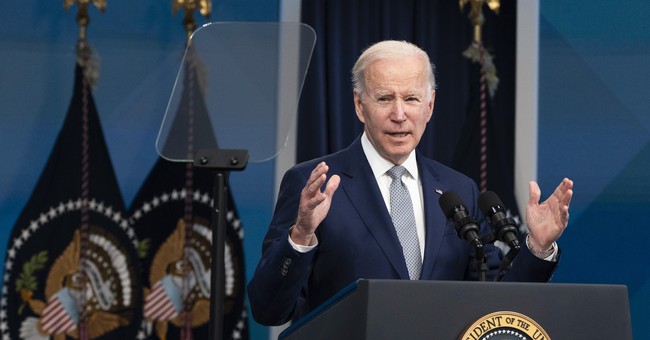 On Tuesday, President Joe Biden gave his speech on inflation, in which he denounced Sen. Rick Scott (R-FL) in a way that included thinking he was a senator from Wisconsin. Biden also referenced that pet phrase of his when denouncing the Republican Party and Republicans overall, "ultra MAGA," no less than five times. During his remarks on Wednesday in Chicago, the president took that term even further when he referred to former President Donald Trump as "the great MAGA king," which has since led the phrase to trend over Twitter.

The speech took place at the International Brotherhood of Electrical Workers 40th Annual Conference in Chicago, where the president was speaking in support of unions.

Biden touched upon inflation in this speech as well, claiming "I know folks are concerned about inflation" and "I understand," it was not in reference to ARPA. During Tuesday's speech, Biden had taken to blaming the Wuhan coronavirus pandemic and Russia's invasion of Ukraine, despite how his own policies have worsened inflation.

"My Republican colleagues say these programs to help the working-class and middle-class people — that’s — they say that’s why we have inflation.  They’re dead wrong," is how he phrased it, before going in to add what his now become his trademark phrase.

Biden refers to Trump as "the great MAGA king." pic.twitter.com/tkONV6dbxf

As Leah highlighted earlier on Wednesday, even CNN's fact-checker pointed out that Biden's claim he reduced the deficit by $350 billion was "distorting reality," since "the deficit has been bigger under the Biden administration than the nonpartisan federal Congressional Budget Office had projected it would be if the Biden-era federal government stuck with the laws that were in effect when Trump left office in early 2021."

Biden would later attack Republicans on inflation once more. "I believe in bipartisanship.  Right now, the majority of our Republican friends just see things differently.  They don’t want to solve inflation — inflation by lowering the costs.  They want to solve it by raising taxes and lowering your income," he claimed.

Further, a poll from last month by CBS News/YouGov, as Spencer and I highlighted, shows that "In economic views, inflation outweighs jobs," according to a write-up from CBS News. Just 31 percent of respondents approved of Biden's handling of inflation.

And, Republicans also enjoy far more support when it comes to who voters trust on these issues.

This wasn't the first time Biden mentioned MAGA, though, in his speech:

The American Rescue Plan provided eviction relief, funding for states and cities to allocate to landlords and renters — help them keep a roof over the heads — 5 million households.

Remember those long lines you’d see on the television and people lining up in all kinds of vehicles just to get a box of food in their trunk?  How quickly we forget people were hurting.

God, this is the United States of America.  The idea that people would have to wait in line an hour or hour and a half to get a box of food in their trunk — it’s just unbelievable.

You know, the American Rescue Plan helped 41 million people put food on the table — 41 million; the money in the pockets of hardworking Americans who, through no fault of their own, were in trouble, giving families what my dad called “just a little bit of breathing room.”

When it comes to the American Rescue Plan Act (ARPA) that Democrats tout, which passed in March of last year, it's not just "the MAGA crowd" who was concerned. Every Republican voted against it, including those who would certainly not be considered part of that camp of the Republican Party. Rep. Jared Golden, a Democrat from Maine, even voted against it.

ARPA has also led to rising inflation, as Larry Summers, a Democratic economist who served as Secretary of Treasury under President Bill Clinton--hardly part of "the MAGA crowd"--has warned for some time now.

Biden once more referenced "MAGA" later in the speech when he went after Sen. Scott, though this time he at least knew what state he's from.

The president also advocated for the PRO Act, not just to be "pro-union," but to "because I'm pro-American." As Gabriella Hoffman, a columnist for Townhall has highlighted many times, though, the PRO Act would be especially damaging to freelance workers.

Biden not only claimed it's "pro-American" to be for the PRO Act, but had disparaging words for those against it. "Let’s be clear for our Republican friends: You can’t say you’re working — you’re for working people and vote against the PRO Act. It’s not consistent," he claimed.

As the official White House transcript did note, though, that Biden mixed up the number of airports in the country, referring to the "more than 300 airports across all 50 states," when in reality there are more than 3,000 airports.

On Tuesday, outgoing White House Press Secretary Jen Psaki revealed that "it is the president's phrase" and he came up with it himself when it comes to "Ultra MAGA." Psaki offered "I think what has struck him is how extreme some of the policies and proposals are that a certain wing of the Republican Party — that is taking up too much of the Republican Party — are for and are advocating for."