White House Correspondents Dinner: Dr. Fauci Is Out, President Biden Is In 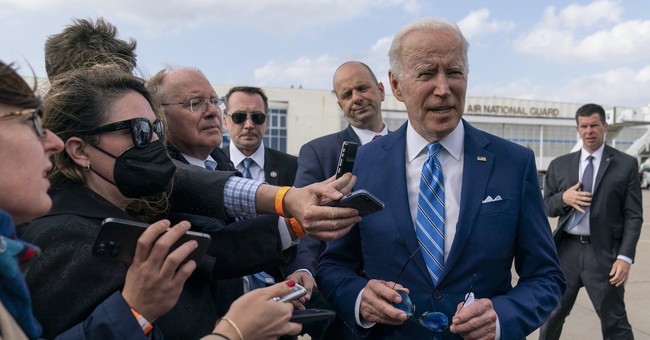 Returning after a hiatus in 2019 and 2020 due to the Wuhan coronavirus pandemic, the White House Correspondents Dinner is back this Saturday night. As Leah highlighted on Thursday morning, Dr. Anthony Fauci will not be appearing at the dinner, and that's only one of many examples when it comes to Fauci's flip-flopping. President Joe Biden, however, will be speaking at the dinner. A report from Reuters noted that Biden's appearance marks the first time since 2016 that a president will speak at the annual event.

Organizers are requiring every attendee be tested for the virus, and some top officials, including infectious disease expert Dr. Antony Fauci, have dropped out.

The White House said Biden will take extra precautions at the event - skipping the dinner portion and attend only the speakers program, White House press secretary Jen Psaki said on Wednesday. He may opt to wear a mask when he is not speaking...

Another Reuters report, linked in the piece above, mentions that "Biden to limit his time at White House correspondents dinner to avoid COVID exposure."

President Biden and Dr. Fauci have both received their second booster shot, for a total of four shots against the virus, so far.

It was announced that Vice President Kamala Harris tested positive for the virus earlier this week. As Spencer mentioned in his coverage, Harris was not considered a "close contact" of Biden.

During Friday's press briefing, White House Press Secretary Jen Psaki previewed the speech. "As you’re well aware, tomorrow the President and the First Lady will attend the White House Correspondents’ Dinner, where the President will speak.  And I will lower expectations and say it’s not funny at all. Just kidding," she said to laughter. "See?"'

She also responded to questions about protocols in place, and more about the president's speech:

Q    So, it sounds like the President is still planning to attend the White House Correspondents’ Dinner.  In the past when he’s been exposed in large events, the White House has noted that there might be an increase in his testing following those.  Are there any plans to change the President’s testing procedures following these big events that he’s been attending, like the dinner and the two memorial services he attended?

MS. PSAKI:  The testing protocol is determined by his doctor.  He was tested yesterday, and he tested negative.  But I don’t have anything to predict in terms of the future.

I noted this the other day, but I think it’s important for your question here, is that the President — we made a decision — it was important to him to attend the dinner to honor the work of journalists — all of you, many of your colleagues around the world — something the former President didn’t do.

But we also took additional steps.  He’s not attending the dinner portion.  He’s coming for the program.  So — and he will likely wear a mask when he’s not speaking.  Obviously, he’ll speak.  And so he’ll be there for about an hour or 90 minutes, I guess, depending on how long Trevor Noah speaks and others speak in the program.  But we took that additional step as well.

And then he’s, of course, sitting on the dais up in the front.  So the interaction — he’s not attending any of the receptions or anything along those lines either.

Q    And then, on the remarks, the President has been a guest on several late-night shows.  Has he consulted any of those hosts, comedians, brought in any outside help on his speech?  Can you kind of bring us in the room on how he’s approaching this as someone who has attended several of these dinners and seen them play out?

MS. PSAKI:  He has.  I will tell you the President has a very good sense of humor and is working hard on his own speech.

With how many of Biden's speeches have gone lately, it may not even be a matter of watching if he's "funny" or not, but how coherent he can manage to sound standing up there. There are sure to be gaffes from the president, but they're getting more concerning than they are funny considering Biden is supposed to be the leader of the free world. That he's "working hard on his own speech," according to Psaki, is sure to raise even more eyebrows.

In recent remarks he's given, Biden has memorably tried to shake hands despite nobody being there. He's also demonized Republican opponents with false narratives and eye-roll-inducing talking points.

On Wednesday night, as Leah highlighted, Biden claimed at a 2022 Teacher of the Year ceremony that "they’re all our children. And the reason you’re the teachers of the year is because you recognize that. They’re not somebody else’s children. They’re like yours when they’re in the classroom."

He also claimed in those remarks that "Today, there are too many politicians trying to score political points, trying to ban books — even math books.  I mean, did you ever think — even you younger teachers — did you ever think, when you’d be teaching, that you’d be worried about book burnings and banning books, all because it doesn’t fit somebody’s political agenda?"

The RNC released a statement on Saturday afternoon about the upcoming speech. "The American people aren’t laughing. Families can’t afford gas and groceries, the border is a humanitarian crisis, and violent crime is leaving communities hopeless. As Biden parties with Washington and Hollywood elites, they have turned their backs on the problems they’ve created," said RNC Spokesperson Emma Vaughn. "The White House press is partying with a president who has been the least accessible in decades. Joe Biden has now gone nearly three months without doing a press interview."

Joe Biden's last press interview was on February 10 — 80 days ago.

As I've highlighted before, Biden is considered one of the least transparent presidents in decades, not merely according to a statement from the RNC, but reporting from outlets such as The Hill.