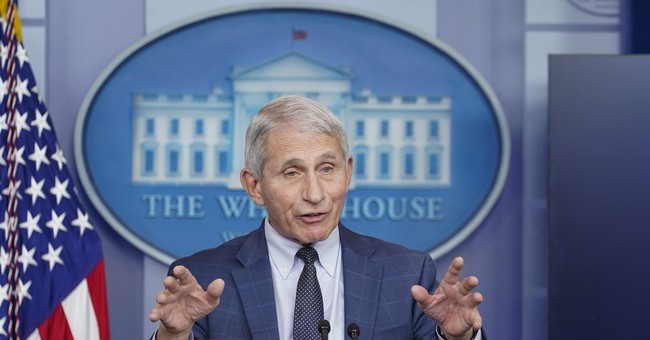 Dr. Anthony Fauci made a Wednesday appearance on MSNBC's "Andrea Mitchell Reports," during which he was asked about how China is handling its "Zero COVID" policy involving lockdowns of the most frightening sort. As Katie covered earlier this week, people can be heard screaming from their windows while a drone flies by telling them to quiet down. Both Mitchell and Fauci went about their discussion in just about the most dispassionate way possible.

Fauci referenced how "China has a number of problems," but he did also claim that "their approach" of "a strictest lockdown that you'd never be able to implement in the United States... prevents the spread of infection," and went on to say about China, "Remember, early on, they were saying, and I think accurately, that they were doing better than almost anybody else."

When it comes to lockdowns, a study from Johns Hopkins, which Leah covered earlier this year, found that in Europe and the United States, lockdowns had "little to no" effect on mortality. The study also found that the lockdowns "only reduced COVID-19 mortality by .2% on average."

Further, as Spencer covered earlier this week, in the Final Report Card on the States' Response to COVID-19, compiled by the Committee to Unleash Prosperity (CUP), the five worst jurisdictions were New Jersey, Washington, D.C., New York, New Mexico, and California. These bright blue states, and D.C., imposed costly lockdowns as part of their measures to combat the Wuhan coronavirus.

Fauci also didn't expand upon why "you'd never be able to implement [such lockdowns] in the United States." Perhaps it's because the Chinese people are under the rule of the Chinese Communist Party, and thus do not have the freedom to speak out.

“Early on, [China] was saying — and I think accurately — that they were doing better than anybody else.” pic.twitter.com/yM4WYAIw34

Fauci then went on to further discuss these "problems" with lockdowns. If you were hoping for him to call out the egregious human rights abuses, though, you'd be sorely mistaken.

"But lockdown has its consequences," Fauci continued. "You use lockdowns to get people vaccinated, so that when you open up, you won't have a surge of infections, because you're dealing with an immunologically naive population to the virus, because they've not really been exposed, because of the lockdown."

What's the problem with China? Fauci says it's their vaccines. "The problem is that the vaccines that they've been using are not nearly as effective as the vaccines that are used in the United States, the U.K., the E.U., and other places. So they don't have the degree of protection that's optimal," he offers.

The full interview is available on MSNBC.com, with this segment taking place toward the end. While there was a technical difficulty during which Fauci was discussing how older populations are affected, it doesn't appear that Fauci raised concerns about the draconian situation that the Chinese people are enduring.

What the?? This video taken yesterday in Shanghai, China, by the father of a close friend of mine. She verified its authenticity: People screaming out of their windows after a week of total lockdown, no leaving your apartment for any reason. pic.twitter.com/iHGOO8D8Cz

Above is the tweeted footage that Mitchell perhaps should have discussed with Fauci. There's also been footage of meowing cats tied up in bags and left on the street, and a dog being beaten to death after his owners were infected with the virus.

China was also in the news for its "Zero COVID" policies during the Winter Olympic Games earlier this year, as it subjected athletes unlucky enough to test positive for the Wuhan coronavirus to quarantine in inhumane conditions. Other countries striving to achieve that, such as Australia and New Zealand, have also been criticized for their infringement upon civil liberties in the name of "Zero COVID."