There's Been a Lot of Misinformation About Missouri's Abortion Bills, Thanks to Pro-Abortion Media 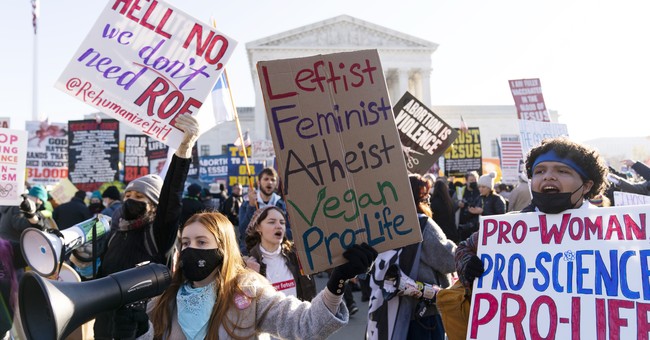 There's a record-high of pro-life bills being passed at the state level, and with it, dishonest attacks. Earlier this month, Madeline reported on a bill from State Rep. Mary Elizabeth Coleman (R), which seeks to curb out-of-state abortions.

As Coleman explained to Townhall, Planned Parenthood in St. Louis will schedule patients for their megaclinic in nearby Illinois that opened in 2019, when Missouri passed their heartbeat bill. "What my language is doing," she explained, "is trying to stop people trying to avoid the pro-life protections in the state of Missouri, by just directing them across the river."

The creation of the megaclinic has had an effect tragically, Coleman shared, as over 10,000 Missouri children have lost their lives to abortion since it opened.

According to Coleman, Planned Parenthood and other activists are also raising money to open a call center to direct women from Missouri and other states to that megaclinic in Illinois, where the abortion laws are particularly relaxed.

Some of the misinformation about Coleman's bill has been about First Amendment protections, but, "states have broad latitude to regulate commercial speech," Coleman shared. Billboards throughout Missouri which advertise for abortions in Illinois will no longer be allowed.

Coleman has been subject to attacks from the media. Categorized as 'Bonkers' by The Daily Beast, AJ McDougall wrote that "Missouri Bill Would Use Snitches to Stop Women From Getting Out-of-State Abortions."

Coleman also referred to "the barrage of hate, and the death threats, and the really vile things that people send our offices" as "incredible." She pointed out that "I've never seen anybody supposedly trying to protect women or arguing on behalf of women be so vile," adding that "I can't even repeat the nicest of the things that people say."

There's also been confusion with a separate abortion bill offered by State Rep. Brian Seitz (R). That bill relates to the trafficking of abortion drugs.

Abortion activist Kate Smith, who formerly covered the issue for CBS News, has come up with several Twitter threads calling out pro-life bills. This includes Seitz's bill, claiming he wants to outlaw the treatment of an ectopic pregnancy. Removing an ectopic pregnancy, which occurs outside of the uterus, is not considered an abortion. It is not viable and can kill the woman.

A bill in Missouri makes illegal to get an abortion if the patient has an ectopic pregnancy.

Facts about ectopic pregnancies:
- They’re are not viable. Full stop.
- They’re the 1 cause of death for 1st trimester patients.

It may be worth questioning why it was necessary for "ectopic pregnancy" to be included in the bill, but such questioning ought to be done through an honest lens.

The mention of "ectopic pregnancy" appears to be included to raise awareness about dangerous chemical abortions. The Biden administration has allowed the method to be even less regulated, when the Food and Drug Administration (FDA) last December did away with commonsense safety regulations. As a result, pregnant women do not need an in-person visit to acquire the drug regimen of mifepristone and misoprostol.

An in-person visit allows for a woman to have an ultrasound to confirm she is pregnant, she is within the 10-week limit that this method has been approved for, and she is not experiencing an ectopic pregnancy.

This method now accounts for a majority of abortions, at 54 percent. It's also led to a rise in abortion rates overall.

A study released last November shows that ER visits went up 507 percent thanks to this method between 1999-2015. More recent rates may be even higher, considering that the method was approved for later in pregnancy in 2016.

Beyond the Twitter replies who took Smith's bait, there's an article from Maureen Breslin, who writes for The Hill that "Missouri bill seeks to ban terminating life-threatening ectopic pregnancies." The editorial board of the St. Louis Post-Dispatch claimed in an editorial that "Missouri bill to outlaw abortion in ectopic pregnancies is effectively a death sentence." Levin wrote another headline for Vanity Fair, claiming "MISSOURI REPUBLICAN PROPOSES ANTIABORTION BILL THAT WOULD LITERALLY KILL PREGNANT PEOPLE."

Secular Pro-Life, in a blog post by Sarah St. Onge, highlighted such coverage.

"While media hyperbole about abortion restrictions is typical, Missouri’s HB 2810 has confused even some staunch anti-abortion advocates with its mention of ectopic pregnancies," St. Onge acknowledges, going on to explain that the "Part of the confusion is most likely due to the presentation of three different changes under two separate statutes[.]" She also mentions that "The combination of the three is confusing but intentional for legal purposes."

The key issue is that removing an ectopic pregnancy is not considered an abortion, which is made clear in Missouri law. As St. Onge explains, with original emphasis:

Note that in the state of Missouri, by definition abortion is the intentional destruction of the embryo or fetus situated inside her mother’s womb (subsection a) or the termination of pregnancy with an explicit intention of preventing a live birth (subsection b). An ectopic pregnancy is always located outside of the mother’s womb and (with the exception of a few anomalous cases) will not result in a live birth – in fact most embryos involved in an ectopic pregnancy are also already dead by the time the defect is detected. This definition precludes an ectopic pregnancy from being classified as an abortion in the state of Missouri, in any context, including in the added section 188.090.

In addition, 188.090 concludes with the language “in violation of any state or federal law.” Missouri anti-abortion legislation (188.030.1 RSMo) permits abortion to save not only a woman’s life, but also her fertility. Section 188.375.6 permits a physician, in the case of an emergency, to bypass methods of termination/delivery which would benefit the child if the methods would further endanger the mother. In every way possible, when it comes to pregnancy emergencies, Missouri law favors pregnant women over their unborn children. This law does not apply to any physician treating an ectopic pregnancy, in any way, shape, or form.

Missouri’s HB 2810 is not “a death sentence” and does not outlaw termination of ectopic pregnancy. Instead, it states:

St. Onge also responded directly to Smith on Twitter with her own thread.

The good news is that even with attacks against Coleman, she may be on to something. A popular piece for POLITICO on Saturday read that "Missouri wants to stop out-of-state abortions. Other states could follow."