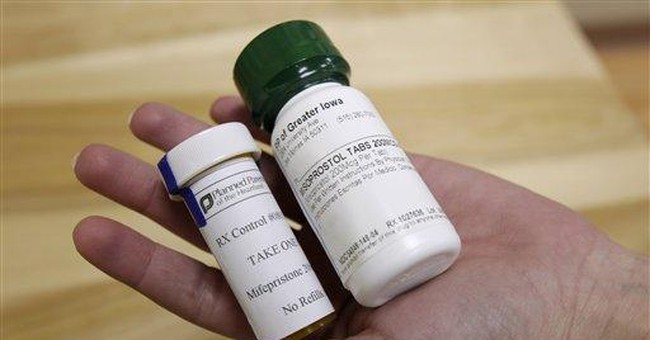 With the Food and Drug Administration (FDA) being expected to announce its decision on December 16 regarding health and safety regulations on chemical abortion, they may wish to keep in mind a new study from the Charlotte Lozier Institute (CLI) showing that the method is particularly dangerous.

The study in question is "A Longitudinal Cohort Study of Emergency Room Utilization Following Mifepristone Chemical and Surgical Abortions, 1999-2015," which was recently published in the international peer-reviewed journal Health Services Research and Managerial Epidemiology.

A press release from CLI explains more about the novel study, with original emphasis:

CLI scholars Dr. James Studnicki, Dr. Donna Harrison, Tessa Longbons, Dr. Ingrid Skop, Dr. David Reardon, Dr. John W. Fisher, Dr. Maka Tsulukidze, and Christopher Craver are the first researchers to utilize Medicaid claims data to conduct a 17-year longitudinal analysis of 423,000 confirmed abortions and 121,283 confirmed subsequent visits to an emergency room within 30 days of the abortion by women over 13 years of age, with at least one identifiable pregnancy between 1999 and 2015.  The study population resides in the 17 states whose official policies used state taxpayer funds to pay for abortions.

According to Medicaid claims data, visits to the emergency room following a chemical abortion increased by 507 percent from 2002 to 2015. Also of concern should be that most these ER visits, over 60 percent, were miscoded as spontaneous miscarriages, which a press release from CLI learns is "potentially putting patients at risk and masking the true dangers of chemical abortion."

A new CLI longitudinal study examined the largest universe of actual US pregnancy outcomes ever analyzed, using Medicaid data from 1999 to 2015 which shows chemical abortion is not as safe as the abortion industry claims. https://t.co/qQ4y1vEIwd 2/6

Chemical abortions were also noted to make subsequent abortions more dangerous, as women who had a chemical abortion followed by a second abortion of any type within the next 12 months were more than twice as likely to wind up in the ER. 4/6

The data is clear. If the FDA cares about women's health and safety, they need to #followthescience and keep these safeguards in place. 6/6

In a statement for Townhall, Dr. James Studnicki, the lead author of the study and vice president of data analytics at CLI, underscored how this is truly a health risk and that expanding coverage of this method is, in fact, dangerous.

"Our data measures actual, confirmed events, and the stark reality is that the rate of chemical abortion related ER visits is growing remarkably fast.  The data suggests that eliminating public health safeguards on the abortion pill would increase emergency room utilization and place more women at risk.  This represents a serious public health threat," he said.

While the Trump administration supported the regulations, which were upheld by the U.S. Supreme Court, the FDA in April under the Biden Administration temporarily lifted them, citing the pandemic. According to court documents for Chelius v. Becerra, the FDA is working towards a December 16 decision, just under a month away, to see if they will permanently lift such regulations.

Such regulations, known as the Risk Evaluation and Mitigation Strategy (REMS), involved in-person visits to screen for pre-existing conditions. This could entail whether to see if a woman is in fact pregnant and how far along she is.

Also, it is key to check if a woman is experiencing an ectopic pregnancy, a nonviable pregnancy that occurs outside of the uterus, and which can be fatal to the woman. While removing this fatal, nonviable pregnancy is not an abortion, the chemical abortion method, which uses mifepristone and misoprostol, will not end that pregnancy.

The method was first approved by the FDA in 2000. In 2016, the approved use for when a woman could undergo this method was extended from seven weeks to 10-weeks of pregnancy. In doing so, the FDA approved a method that carries with it more risks and dangers for women, as the failure rate increases as the pregnancy progresses.

Some some studies have found 10 percent of women face incomplete abortions at 9-weeks gestation. This can lead to death from infection if remaining fetal parts or tissue are not properly removed.

A woman having the abortion will begin by taking Mifepristone, which will cut off nutrients to starve her unborn child. A day or two later she will take Misoprostol to induce contractions. At home, without medical supervision, her body will expel the dead child.

This method is depicted in the 2019 movie "Unplanned," and is explained over Live Action's Abortion Procedures site, as well as This is Chemical Abortion, a project from Students for Life of America.

This method carries with it four times the complications of surgical abortions. Side-effects and risk associated with this method include abdominal pain, nausea, vomiting, diarrhea, weakness, fever/chills, and headaches. The bleeding may last for weeks after the abortion.

It's also gaining popularity. Thanks to this method--which accounted for 41 percent of abortions in 2018--total abortions have actually increased.

While this is a particularly dangerous abortion method, it's worth pointing out that the study also found that the rate of ER visits following a surgical abortion increased by 315 percent in that same time period of 2002-2015.