Beto Just Came Out Against a Major Democratic Issue 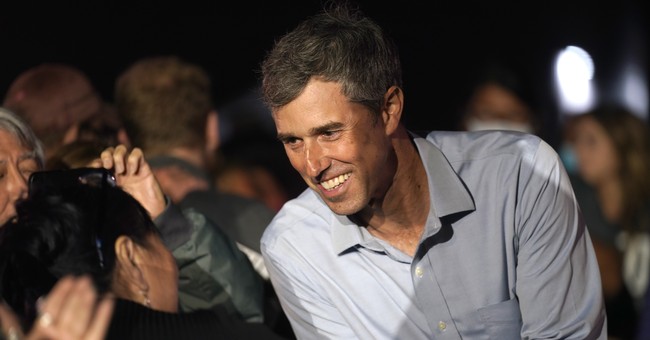 Speaking to a crowd on Friday, in Victoria, Texas, former Rep. Beto O'Rourke, who is now running for governor against Gov. Greg Abbott, became one of the first Democratic politicians to come out against Critical Race Theory (CRT). His comments, though, which signal a reversal in opinion, came after he tried to deny that CRT was taught in Texas at all, which is another typical Democratic talking point.

"And I think you and I are probably on the same page as well. We don't see CRT being taught in our schools right now. It is a course that is taught in law schools," he initially said.

When someone asked if he thought it should be taught in school, O'Rourke answered "No, I Don’t Think It Should Be Taught In Our Schools, Yeah."

Gov. Abbott signed SB3 into law last September which dealt with education, including the banning of CRT. While some tried to claim CRT wasn't being taught in K-12 schools in Texas, a blog post from last June by Roy Maynard for the Texas Public Policy Foundation outlines how he saw such theories being implemented in high school debate competitions.

...As a high school debate coach, I’ve watched critical race theory crush the souls of students for years. When it began to creep into the honored and honorable academic pursuit of policy (CX) debate, it lowered standards, created division and sundered relationships.

Let me explain how. Policy debate pits two two-person teams against each other. The Affirmative team (Aff) presents a plan that falls within this year’s topic; the Negative team (Neg) argues against that plan. This requires immense research and study; if the year’s topic is, say, the oceans, teams must be prepared to argue against plans ranging from the Law of the Seas Treaty to plastics to overfishing.

This kind of argument is called a kritik—debate jargon for employing critical theory (including, and especially, critical race theory) to undermine not the plan you’re supposed to be refuting, but the very legitimacy of liberal society, Western history and even debate itself.

He lists examples as well:

The language of critical race theory is new to most Americans, but debaters have been parsing these words and phrases for years. “Equity” is in; fairness is out. Black bodies, colonialism, “words are violence,” ontological death—these concepts are tossed around in classrooms and tournaments throughout Texas.

Here’s what I saw first-hand. One of my teams, two Senior girls, went into a round as the Affirmative team. I don’t recall the topic that year (a decade ago), but I do remember them emerging from the round in tears. They lost—and were told they lost—because the Negative team argued they should lose. As two white, privileged students from a private school, Neg claimed, the Affirmative team embodied everything wrong with America.

I thought there had to be some mistake. But when I saw the ballot a couple of hours later, it was true. The judge wrote that in the interest of social justice, he handed the win to the Negative team—even though Neg offered not a single argument against the Aff plan.

What does one kritik-dependent team do when it comes up against another kritik-dependent team? I’ve watched those rounds devolved into a morass of intersectionality. “You may be female, but I’m Hispanic.” You may be Hispanic, but I have a learning disability.” “Your school spends more per-student than mine.”

How can debaters respond to critical race theory and similar arguments? They can’t; CRT is non-falsifiable, and to take any position against it is to display “white fragility”—an argument I’ve seen used against non-white students.

Perhaps O'Rourke woke up and noticed the polling, which has him down 10-points, according to last month's University of Texas/Texas Politics Project Poll.

Or, maybe he learned what not to do from former Gov. Terry McAuliffe, who was elected governor of Virginia in 2013 and ran again in 2021. He ultimately lost last November to Gov. Glenn Youngin. On the campaign trail, McAuliffe frequently dismissed concerns with CRT as being "another right-wing conspiracy," and something that was "totally made up by Donald Trump and Glenn Youngkin." McAuliffe also continued to deny that CRT was taught in Virginia schools, despite such CRT lessons being taught and promoted by the Virginia Department of Education website.