Kamala Harris Can't Be Bothered with Proper Border Visit, But She Did Go to Honduran President's Inauguration 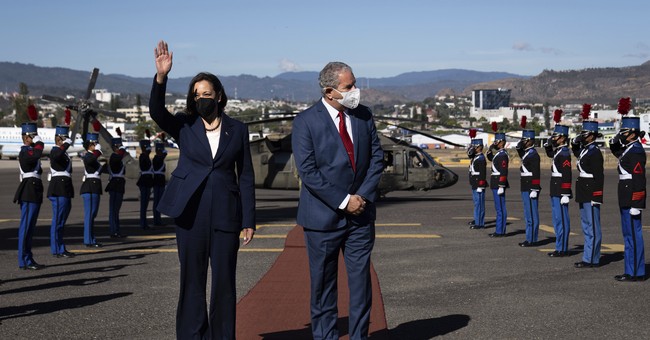 It's been over 10 months since President Joe Biden named Vice President Kamala Harris the border czar, among many other tasks, which she has also failed at. Since then, she has made one border visit--if you can call it that--which took place last June. While Harris doesn't have time for multiple visits, never mind more proper ones, she does have time to attend the inauguration for Honduras' Xiomara Castro, a socialist, which took place on Thursday.

The RNC called out Harris' lack of responsibility when it came to her attending. "Border Czar Kamala Harris is yet again dodging responsibility and flying over the Biden border crisis to travel to Honduras to celebrate the inauguration of a self-avowed socialist. Nearly 2 million illegal immigrants have been apprehended at the border, deadly drugs are pouring in, and crime is surging. Biden and Harris don’t care about the devastation their failed policies are causing the American people," RNC Communications Director Danielle Alvarez said in a statement.

Fox News' Houston Keene covered the trip on Wednesday, covering what other outlets did not when it comes to Castro's troubling attributes, as well as that of First Vice President Salvador Nasralla and Nasralla's wife, who have made noteworthy comments about Jews and Israel.

In 2020, Nasralla claimed that outgoing Honduran President Juan Orlando Hernández’s "boss is the government of Israel" and said in a debate that Jews control the global money supply.

Additionally, Nasralla’s wife gave an apology to the Latin American Jewish Congress after she said in an interview that "Hitler was a great leader."

Harris has run into trouble for failing to call out antisemitism before. Last March she gave opening remarks for the 2021 Black Women's Roundtable "Women of Power" Summit, where anti-Semite figure Tamika Mallory, who co-founded but was too extreme to remain part of the Women's March, also spoke.

Last October, Harris also took questions from students at George Mason University, where one student claimed in remarks unchallenged by Harris that Israel was engaging in "an ethnic genocide." Harris thanked the young woman for speaking her truth, while her office was left to later do damage control.

On Thursday, the White House released a readout between Castro and Harris, which was the newly inaugurated president's first meeting with a foreign leader.

According to the readout, the two discussed issues such as "addressing the root causes of migration, combatting corruption, and expanding economic opportunity." Additionally, the vice president told President Castro that vaccines against the Wuhan coronavirus will be arriving in the country.

"Gender-based violence" also received lengthy discussion. According to the readout:

The two leaders also discussed their shared concerns with gender-based violence in Honduras. Vice President Harris stressed the importance the U.S. places on combating sexual, gender-based and domestic violence and how this work is a core pillar of the U.S Strategy for Addressing the Root Causes of Migration in Central America. They also committed that United States and Honduran government agencies will initiate a strategic dialogue to take action on key bilateral issues, including anti-corruption, irregular migration, economic recovery, human rights, and security.

It does not appear that Harris raised the issue about Nasralla's antisemitism, though, since it did not receive mention in the readout.

Harris is expected back in the United States late Thursday night.