ICYMI: One Year Into Biden's Presidency, the Republican Study Committee Certainly Has a List of Grievances 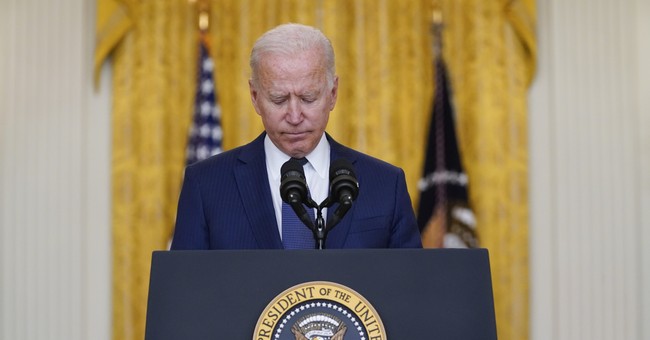 President Joe Biden has been in office for a little more than a year now. As that one year anniversary approached, members of the Republican Study Committee (RSC) took to the House floor to air the list of grievances, as well as highlight what Republicans will do better when they are expected to take back control of the House following the results of the November midterm elections.

The members were led by Rep. Jim Banks (R-IN), who chairs the RSC. Banks offered that the American people are actually unified, and while it has to do with Biden, it's not in the way the president who got elected on claiming he would be a great unifier and bring people together anticipated. Rather, it's because Biden has performed so poorly, that Rep. Banks suggested that "at least on one question, Americans are more unified than ever before."

He went on to point out that "the Biden presidency has been a failure. After one year in office, President Biden's approval rating is the lowest ever recorded after the first year in office of any president in American history."

Banks was referring to Biden's 33 percent approval rating from a Quinnipiac poll earlier this month.

While Biden's predecessor, former President Donald Trump, often fared worse in the polls, his numbers were fairly consistent. No other president has seen such a steep decline in support as Biden has during his first year in office.

Banks reminded that "why is no mystery," as he shared that "by every measure, American are worse off today than when Biden took office." The congress continued by listing off issues where the Biden presidency has failed, with these specific issues also being reflected in the polls. "Inflation, crime, the debt, the border, Afghanistan, a never-ending pandemic, Americans have endured humiliation abroad and division at home."

Worse, "all of these disasters are manmade," Banks offered. "Everyone knows why inflation is at a 40-year high. Everyone knows why Americans wages have been cut by 3 percent, or more. Democrats spend trillions and then passed the largest federal budget in history."

"How, in less than a year did we go from energy independence to begging Saudi Arabi for oil? Well, maybe it has something to do with the president banning new natural gas production in the United States."

In between listing other issues, such as the border crisis and the resulting impact of fentanyl becoming highest cause of death among Americans ages 18-45, crime, and policies to do with the Wuhan coronavirus, Banks called out the media for their reaction to such domestic crises during Biden's first year in office.

"You see, the media wants to make things complicated," Banks cautioned. "They want you to believe that no one really knows why you're paying close to $4 a gallon at the pump. They want to separate the consequences of the last year from the cause, but don't be fooled, Madam Speaker."

"There's a border crisis because the Biden administration stopped building the wall, cut deportations by 90 percent, and reversed every single one of President Trump's successful border enforcement measures. Fentanyl is now the leading cause of death for Americans aged 18 to 45 because it, too, is pouring across a wide-open southern border. It's that simple," Banks explained about the border.

"There are still hundreds of Americans stranded in Afghanistan because the Biden administration didn't prioritize its own citizens for evacuation."

On all of the above issues discussed, polling indicates that Biden is underwater on them, and very likely because of the reasons Banks mentions.

Poll results on Biden's handling of the Wuhan coronavirus are mixed at best, and also indicate a steep drop in support.

"President Biden's COVID policies do not work," Banks continued. "That's why COVID cases, hospitalizations, and deaths all rose during the Biden presidency. Americans endured mandatory vaccinations, pointless mask mandates, endless school closures, and never-ending Dr. Fauci interviews. And it was all for nothing."

Banks made the argument that "Americans can see what's in front of them. That's why they've rejected this administration. The proof is in the pudding and the pudding is stale. The question is, can Americans endure three more years, just like the last one? I believe that they can, but they shouldn't have to."

"Americans can see what’s in front of them. That’s why they’ve rejected this administration." -RSC Chairman @RepJimBanks pic.twitter.com/MJJ2P7OttK

Throughout the week of the anniversary of Biden's first year in office, the RSC Twitter account was full of tweets highlighting the many failures of this administration, across various policy topics.

Under Banks' chairmanship, it has been a tactic of the RSC to share their own proposals as alternatives to the Biden administration's various problematic agendas.

This included a January 14 memo, "Biden Year 1: A Presidency in Crisis," with various crises touching upon the border, inflation, education, crime, supply chain issues, Big Tech, China, the Middle East, Afghanistan, and faith in our elections.