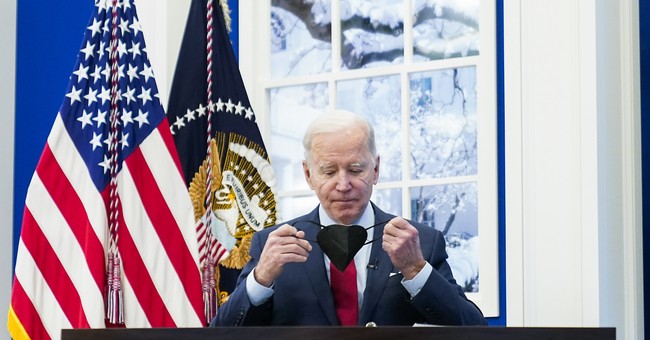 The latest survey from Quinnipiac has more bad news for President Joe Biden as he nears the one-year mark of his administration: just one-third of Americans approve of the job he's done so far.

The survey found that "Americans give President Joe Biden a negative 33 - 53 percent job approval rating," translated by Quinnipiac to mean "A rocky start for President Biden gets him low grades on his year one report card."

Broken down by party affiliation, the disapproval vs approval is more of what observers have come to expect:

Notching such low levels of approval "is as bad as it gets," noted Josh Kraushaar.

New Quinnipiac poll: Biden approval 33/53. Needless to say, job approval in the low 30s is as bad as it gets.

That said, this is an outlier right now.

Quinnipiac also found that 39 percent of Americans believe president Biden is "doing a worse job than expected," 49 percent "say Biden is doing more to divide the country," 54 percent "think the nation’s economy is getting worse," and 70 percent say the economy is "not so good" or "poor."

A lack of approval among independents is what has Democrats scared and Republicans licking their chops now that the country's attention turns toward this November's midterm elections which will decide which party controls the House of Representatives and Senate where Democrats currently have razor-thin majorities.

President Biden's prospective ability to help raise money and awareness for Democrat candidates is already lackluster at best, but with approval ratings in the dumpster like this among independents, it's hard to imagine Biden swinging key voting blocks to Democrats in tight races. It's no doubt part of the reason Georgia Democrat gubernatorial hopeful Stacey Abrams didn't appear with President Biden this week in her home state for his speech about her banner issue: Joe Biden is toxic.

Not only is Biden sure to be unwelcome in congressional districts and states where independents are necessary for Democrat candidates' path to victory, he's been in office nearly a year and yet has very little to show for it. There have been some legislative wins for the White House, such as infrastructure and COVID relief bills, but his promise to "shut down the virus" and "build back better" have been shattered.

The Biden administration has more or less thrown its collective hands up and given up dealing with the Wuhan coronavirus after implementing back and forth restrictions, mandates, and restrictions. Inflation just hit another four-decade high. The southern border is a national security, humanitarian, and public health crisis. Wage growth hasn't made a difference as Americans' costs continue to outpace raises. And then there's Biden's disastrous and deadly withdrawal from Afghanistan, his weakness in the face of Russian and Chinese aggression, and a general inability to handle any blip on his radar.

Now, as Quinnipiac and other surveys have showed, Americans are growing weary of President Biden's broken promises and, if numbers like this hold, seemingly looking forward to registering their disapproval at the ballot box in November.