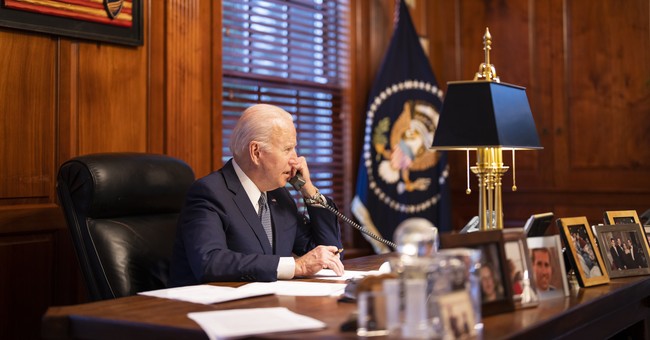 Russia appears to be wasting no time. Fox News reported on Saturday night that a spokesperson for the United Kingdom Foreign, Commonwealth & Development Office said they "have information" that the Russian government is looking to install a pro-Russian leader in Ukraine.

"We have information that indicates the Russian Government is looking to install a pro-Russian leader in Kyiv as it considers whether to invade and occupy Ukraine. The former Ukrainian MP Yevhen Murayev is being considered as a potential candidate," the spokesperson said.

The White House told Fox News that such information was "deeply concerning."

"This kind of plotting is deeply concerning. The Ukrainian people have the sovereign right to determine their own future, and we stand with our democratically-elected partners in Ukraine," said White House National Security Council Spokesperson Emily Horne told Fox News that the plot is "deeply concerning."

In reporting on the statement, The New York Times noted that such public communication is "highly unusual." The report also cited more statements.

"The information being released today shines a light on the extent of Russian activity designed to subvert Ukraine, and is an insight into Kremlin thinking," said British Foreign Secretary Liz Truss." Russia must de-escalate, end its campaigns of aggression and disinformation, and pursue a path of diplomacy."

As the report further mentioned, touching upon the accusation's credibility:

The new accusations from Britain provided few details about how Russia might go about imposing a new government on Ukraine, and the communiqué did not say whether such plans were contingent on an invasion by Russian troops. British officials familiar with the situation, who spoke on condition of anonymity, said the intent was both to head off the activation of such plans and to put Mr. Putin on notice that this plot had been exposed.

Though the Biden administration has been slow to publicly address international affairs such as Cuba, which many have criticized, Secretary of State Antony Blinken tweeted throughout on Saturday about Ukraine. This includes talks with the Canadian foreign minister.

Important discussion with Canadian Foreign Minister @melaniejoly about Russia’s unprovoked military buildup on Ukraine’s borders. We remain committed to diplomacy but are ready, in coordination with @NATO Allies and partners, to impose severe costs for further Russian aggression.

The United States and its allies and partners are standing together to expedite security assistance to Ukraine. We are utilizing all available security cooperation tools to help Ukraine bolster its defenses in the face of Russian aggression.

The U.S. Embassy in Kyiv also tweeted on Friday night that Ukraine had received aid from the United States.

The shipment - and $2.7 billion USD since 2014 - demonstrates U.S. commitment to helping Ukraine bolster its defenses in the face of growing Russian aggression. ???????? #partnershipstrong [2/2] pic.twitter.com/scPFWM3we7

However, it cannot be forgotten that President Joe Biden shocked the world during Wednesday's press conference. He seemed to dismiss concerns when it comes to Russian aggression towards Ukraine and holding Russia accountable, if it was "a minor incursion."

"And so, I think what you’re going to see is that Russia will be held accountable if it invades.  And it depends on what it does.  It’s one thing if it’s a minor incursion and then we end up having a fight about what to do and not do, et cetera," Biden had said.

Ukrainian President Volodymyr Zelensky, as Katie covered, also did not take too kindly to the remarks.