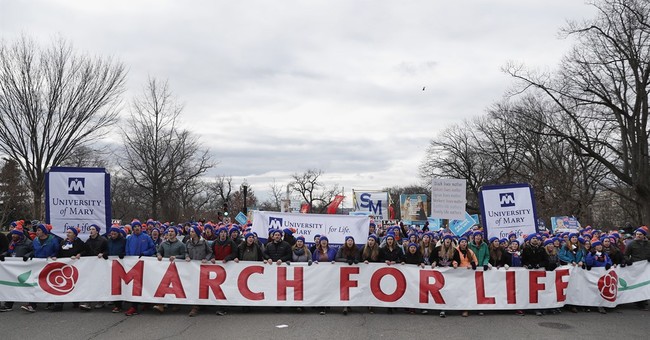 The 49th annual March for Life will take place later this week on Friday, January 21. The days before and after surrounding the event are often a time of fellowship for pro-lifers, from all circles. For Democrats for Life of America (DFLA), this was supposed to mean holding an event for their supporters at Busboys and Poets. The establishment, however, canceled their event when learning that their would-be paying customers hold pro-life views.

Kristen Day, the executive director of DFLA, emailed supporters on January 11 to let them know of the cancellation and request donations to help them find another establishment to patronize on Friday.

It was a very disappointing call today. The Catering Manager specifically mentioned that Planned Parenthood holds events there. Could they be the ones that complained? https://t.co/hDbR8jF3dq

In case there was any confusion that Busboys and Poets was discriminating DFLA over its pro-life position, the establishment confirmed as much to Katie Yoder with Catholic News Agency.

From Yoder's reporting, with added emphasis:

“When our team learned the fundraising nature of the event in question, the decision was made to cancel it and refund all deposits to the event organizer,” a spokeswoman for Busboys and Poets told CNA.

The chain “stands firmly on the belief that women have the right to make their own reproductive health decisions,” she said.

“While we welcome conversations from individuals expressing different viewpoints and pride ourselves on being a venue for respectful conversations between diverse groups, we are also a safe space,” the spokeswoman continued. “As such, we cannot knowingly accept events designed to fund an agenda which our community members believe to be trampling on the rights of others.”

The event guidelines the chain lists on its website do not mention restrictions on events due to their nature or content.

What's particularly significant is that the spokesperson spoke of creating "a safe space," even after claiming that "we welcome conversations from individuals expressing different viewpoints and pride ourselves on being a venue for respectful conversations between diverse groups."

It would appear, then, that clearly the establishment does not "welcome conversations from individuals expressing different viewpoints" and should not "pride ourselves on being a venue for respectful conversations between diverse groups," considering it does no such thing. To such Busboys and Poets, it's evident that being "a safe space" for a pro-abortion position is mutually exclusive from pro-lifers holding an event there.

The establishment's website and social media platforms are full of promotions to do with social change.

Part of their "About" section reads, "Busboys and Poets is a community where racial and cultural connections are consciously uplifted... a place to take a deliberate pause and feed your mind, body and soul... a space for art, culture and politics to intentionally collide... we believe that by creating such a space we can inspire social change and begin to transform our community and the world."

That's so sad. I really enjoyed eating there when I was in DC a few years ago and saw a TON of Dominican friars from the house of studies there. And we're not welcome now?

The establishment, which has eight locations across D.C., Virginia, and in Maryland, was known for being a friendly place for students of the nearby Catholic University of America (CUA), which was founded by U.S. Catholic bishops, or at least it used to be.

Thanks to Harriett's restaurant for agreeing to host the @demsforlife breakfast -- after @busboysandpoets made the awful decision to cancel the event.

Harriett's has always graciously opened their doors to a range of ideologically diverse groups - a restaurant worth supporting!

As of Tuesday, though, there has been a happier update to the situation. DFLA has found an alternate venue, at Harriet's, for Friday.