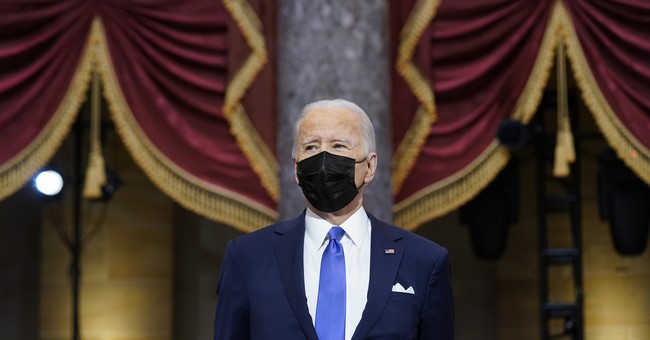 On Saturday, a British man took a rabbi and others hostage at Congregation Beth Israel in Colleyville, Texas. The hostages have all been released, and the hostage-taker, Malik Faisal Akram, is dead. Meanwhile just the day before, President Joe Biden had issued a "A Proclamation on Religious Freedom Day, 2022," with there being a particular sobering theme, as I referenced with Saturday night's coverage.

The president's proclamation in part read, with added emphasis:

Everyone should feel safe when attending a religious service, school, a community center event, or while walking down the street wearing the symbols of their faith.  To help ensure that everyone can practice their faith without fear, my Administration has implemented increased funding for the Department of Homeland Security’s Nonprofit Security Grant Program, which makes funding available to threatened nonprofits — including houses of worship and other religious affiliated entities — to improve their safety and security.  I also signed the COVID-19 Hate Crimes Act, which included the Jabara-Heyer NO HATE Act to provide tools that we know are effective in preventing and prosecuting hate crimes.  We must constantly affirm that hate has no safe harbor in America.  My Administration remains steadfast in our efforts to lead and advance human rights including the freedom of religion around the globe at a time when many people are subject to horrifying persecution for their faith and beliefs.

As also highlighted on Saturday night, White House Press Secretary Jen Psaki tweeted the barest of statements, which did not even mention that the hostage situation had taken place at a synagogue.

.@POTUS has been briefed about the developing hostage situation in the Dallas area. He will continue to receive updates from his senior team as the situation develops. Senior members of the national security team are also in touch with federal law enforcement leadership.

Anthony Coley, the director of public affairs for the Department of Justice (DOJ) also tweeted out the barest information on Saturday night, which the DOJ retweeted.

Attorney General Garland has been briefed on and is closely following the situation in Colleyville, Texas.

At 11:47pm on Saturday, after the hostages had already been released, Psaki tweeted out a link to a statement from the president, which read:

Thanks to the courageous work of state, local and federal law enforcement, four Americans who were held hostage at a Texas synagogue will soon be home with their families. I am grateful to the tireless work of law enforcement at all levels who acted cooperatively and fearlessly to rescue the hostages. We are sending love and strength to the members of Congregation Beth Israel, Colleyville, and the Jewish community.

There is more we will learn in the days ahead about the motivations of the hostage taker. But let me be clear to anyone who intends to spread hate—we will stand against antisemitism and against the rise of extremism in this country. That is who we are, and tonight, the men and women of law enforcement made us all proud.

While the statement did call out antisemitism, it claimed that "There is more we will learn in the days ahead about the motivations of the hostage taker."

The president did speak about the incident on Sunday, during which he began in part by emphasizing the hostage situation was "an act of terror."

Referring to Attorney General Merrick Garland, Biden shared "I also told him that I wanted to make sure we got the word out to synagogues and places of worship that we’re not going to tolerate this, that we have this capacity to deal with the assaults on particularly the antisemitism that has grown up." Biden emphasized he and the attorney general are "focus" and "making sure that we deal with these kinds of acts."

There last question, though, when the president answered a question about the man's "motivations," is perhaps most telling of all.

From the White House transcript:

Q    Mr. President, do you know more about the motivations of the person?

THE PRESIDENT:  No, I don’t.  I — there’s speculation, but I’m not going to get into that.  I will — I’m going to have a press conference on Wednesday, and I’ll be happy to go into detail of what I know in detail at that time.

Q    Do you know why he targeted that specific synagogue, Mr. President?

THE PRESIDENT:  Well, no, I don’t.  We don’t have — I don’t think there is sufficient information to know about why he targeted that synagogue or why he insisted on the release of someone who’s been in prison for over 10 years, why he was engaged — why he was using antisemitic and anti-Israeli comments.  I — we just don’t have enough facts.

We thank the brave men and women in federal, state, and local law enforcement, and we stand in solidarity with the Congregation Beth Israel community and the entire Jewish community. My statement: pic.twitter.com/K262cqQLpb

The statement in part, with added emphasis, read that "While we will learn more about the hostage taker’s motivation, we know this: what happened yesterday at Congregation Beth Israel is a reminder that we must speak up and combat antisemitism and hate wherever it exists."

As I also covered earlier on Sunday, the FBI had taken it a step further and made an even more nonsensical claim that "we do believe that from our engagement with this subject," speaking of the hostage taker, "that he was singularly focused on one issue and it was not specifically related to the Jewish community, but we're continuing to work to find motive and we will continue on that path."

I mentioned in that piece that the man "demanded the release of Dr. Aafia Siddiqui, who is suspected of having ties to al-Qaeda and was convicted of trying to kill U.S. military officers while in custody in Afghanistan." Dr. Siddiqui has herself displayed particularly vocal anti-Semitism.

Ian Hayworth, an editor of The Daily Wire, tweeted out that attacks specifically targeting other communities are called out for what they are.

Making the weekend's incident even more solemn is that Sunday is the actual day for Religious Freedom.

In my life, faith has always been a beacon of hope and a calling to purpose, and I believe that protecting religious freedom is as important now as it has ever been.

On Religious Freedom Day, we rededicate ourselves to protecting the freedom of people of all faiths and none.

Biden's personal account did not make mention of the occasion, though his official account did. The president has not tweeted about the incident from either account.

If you’re unvaccinated and get COVID-19, you are 17 times more likely to be hospitalized.

If you’re not one of the nearly 210 million Americans who are fully vaccinated – now’s the time.

If you have not gotten vaccinated, do it. Personal choice impacts all of us—our hospitals, our country.

COVID-19 is one of the most formidable things America's ever faced. We have to work together, not against each other. We are the United States of America. We can do this.

On such a day, both the president's accounts did tweet a call for Americans to get vaccinated, though.

The Day the Electricity Died
Townhall
This guy, out of all protesters, taunts NRA convention attendees by saying 'you need a gun because you're weak'
Twitchy
Uvalde-Born Matthew McConaughey Strikes the Right Note in Visit to Hometown
Redstate
Why the Heck Did Amber Heard's Legal Team Call Her Back to the Stand?
PJ Media