Well, It Looks Even More Like Democrats Are Doomed in 2022 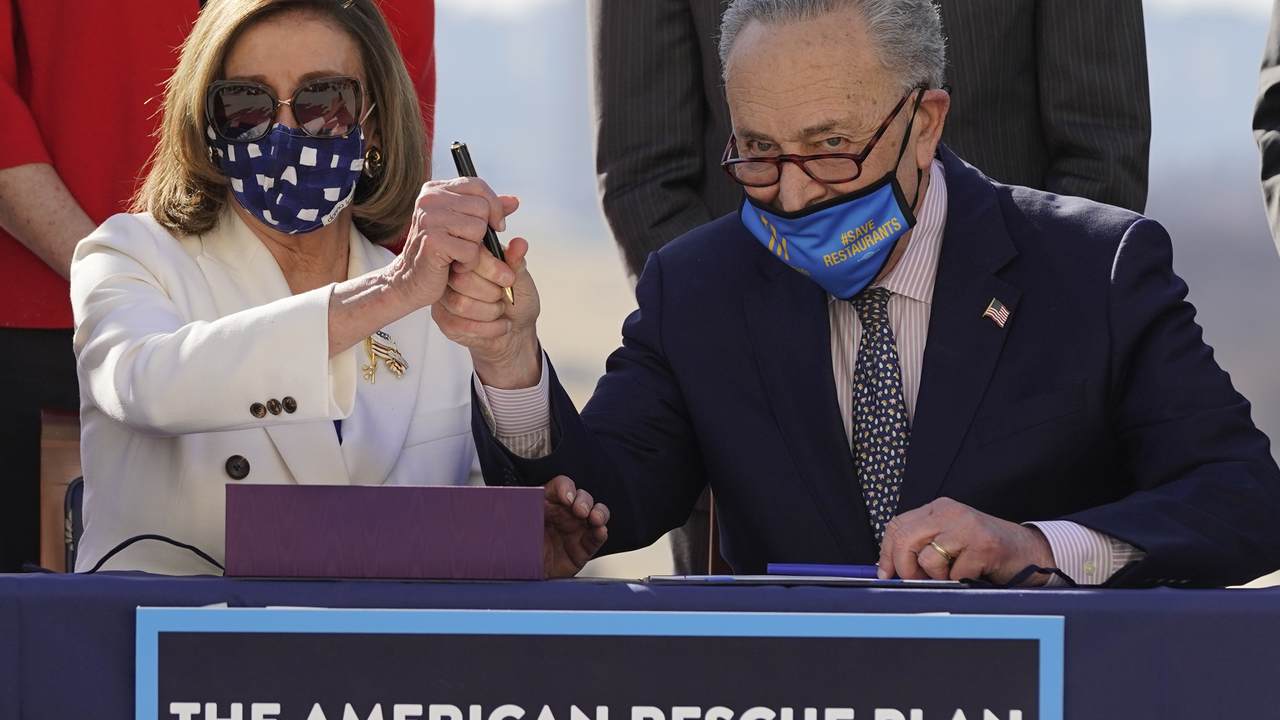 As a matter of historic trends, the 2022 midterms are not looking good for Democrats. And then, Sen. Joe Manchin (D-WV) made it look even more grim when he signaled that he would not vote in favor of the reconciliation spending bill, also known as Build Back Better. That may be putting it politely, in fact.

This isn't just about dunking on Biden and the Democrats. During the president's first midterm election, his party tends to lose seats in Congress. One of the very few exceptions was in 2002, when Republicans gained eight House seats and two Senate seats during George W. Bush's term. Keep in mind, though, that the country was unified after September 11, 2001.

Where it's particularly bad for Biden and the Democrats this time around, though, is that Democrats are technically in control, but they only are in the majority of the 50-50 Senate because Vice President Kamala Harris serves as a tie breaking vote. In the House, Democrats also have a single digit majority.

The American Presidency Project at USC Santa Barbara provides a great resource on midterm elections when it comes to "Seats in Congress Gained/Lost by the President's Party in Mid-Term Elections."

Further, Biden's poll numbers have been dismal. Polling isn't looking too good for Congressional Democrats, either. Multiple generic ballots show the Republican candidate ahead, with a CNBC poll from earlier this month even showing the Republican ahead of the Democrat by 10 points, as Guy highlighted. Last month, he had highlighted a Washington Post/ABC News poll that similarly showed a 10 point lead.

House Minority Leader Kevin McCarthy (R-CA) predicted last month following the 2021 elections that Republicans could flip 60 seats next year. In recent years, the largest pickup was the 63 seats the GOP won in the House during the 2010 midterm elections.

As I just highlighted on Wednesday, the president made some remarks at the DNC holiday party on Tuesday night that were particularly outrageous in how overly optimistic they were. Biden actually claimed, no less than three times, that Democrats were going to win in 2022.

PRES. BIDEN ON 2022 MIDTERMS: "I wanna tell my Republican friends: Get ready pal! You’re gonna in for a problem!" pic.twitter.com/zFO9WSqNtq

While Biden may be saying such things, the DNC knows better.

A top read article on POLITICO for Sunday, by David Siders, reads "‘Let’s get a drink’: Dems confront prospect of a 2022 hurricane." And, it's worth noting that this article is from Saturday morning, before Biden was dealt a blow on Build Back Better.

"Staring at the possibility of major midterm losses, Democratic leaders are just hoping to limit the damage," the subheadline reads.

Siders' piece is chock full of Democratic figures--there were interviews with more than two dozen state party chairs he indicated--coming to terms with realities, such as how midterms not only hurt the president's party, but that it's harder to motivate people to vote in them:

CHARLESTON, S.C. — Democratic Party leaders moved quietly this week to lower expectations for the midterm elections as they met for year-end talks against the backdrop of an increasingly bleak electoral landscape.

The House? Likely gone. The Senate? A crapshoot.

“Success looks like we hold the Senate and we hold the House, or we narrowly lose it, so if Republicans take control, it’s a razor-thin margin,” said Colmon Elridge, the chair of the Kentucky Democratic Party.

“I would hope [the Republican margin in the House] is less than 20,” he said.

At the Charleston Marriott, where Democrats met for training, presentations and receptions, one state party chair called the midterm prospects “awful.” Another state party chair said, “I don’t see any way we keep the House.” And one strategist said, “If we’re in the 10 to 20 [loss of House seats] range, that will be better than we thought.”

“I’m scared,” said Peg Schaffer, vice chair of the Democratic Party in New Jersey, whose Democratic governor, Phil Murphy, won reelection this year, but by a far closer margin than expected. “We need to get the vote out, and in the midterms, it’s hard.”

By every conventional measure, Democrats are staring into a midterm abyss. Inflation is soaring, and large majorities of Americans are anxious about the economy. Biden’s approval ratings — a metric closely tied to a party’s performance in the midterms — are stuck in the low 40s, according to the FiveThirtyEight polling average, and generic ballot tests pitting unnamed Republicans against unnamed Democrats have swung in the GOP’s favor.

There's also issues with the Democratic Congressional Campaign Committee (DCCC). A POLITICO Playbook headline from Friday morning read "‘This is a real f---ing problem,’" with the relevant portion reading:

‘THIS IS A REAL F---ING PROBLEM’ — That’s how one vulnerable House Democrat summarized growing discord between members in battleground districts and the Democratic Congressional Campaign Committee. That member and five others Playbook spoke with in the past week alleged that the Democratic organization whose purpose is to help the party keep the House next year is instead hurting their chances of reelection.

Complaints mostly came down to "Botched messaging," "Jamming Them on Policy," and "Frustrations with the DCCC Chief," which is Rep. Sean Patrick Maloney (D-NY).

Of course, the GOP still has to work to win back the House and Senate, and can't take anything for granted. Rep. Jim Jordan (R-OH) said as much during an interview with Townhall last month. Nevertheless, as of right now, with the elections only ten and a half months away, a red wave is looking very likely.