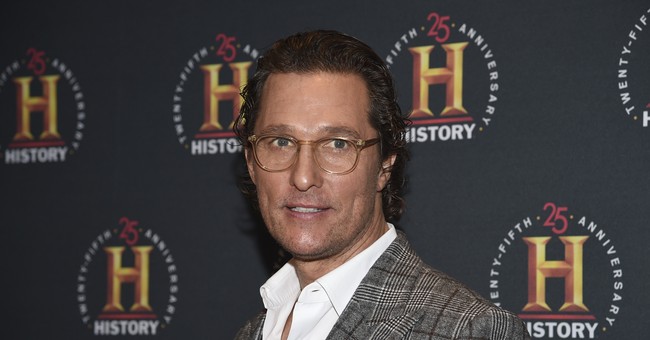 After some pretty serious teasing, actor Matthew McConaughey officially announced on Sunday night that he will not be running to be the governor of Texas after all.

In a slightly over three-minute video shared to his Twitter, McConaughey shared he had been thinking for the past two years "how I can be most useful in this life going forward," including in the area of politics, which involved exploring a run for governor." Towards the end of the video, however, McConaughey shared that while "it's a humbling and inspiring path to ponder, it is also a path I am choosing not to take at this moment."

As McConaughey studied and learned about Texas and American politics, he stressed that he learned "a lot," including "that we have some problems we need to fix, that our politics needs new purpose, that we have divides that need healing, that we need more trust in our lives, that we gotta start shining a light on our shared values," among other things.

He went on to share "I learned that freedom comes with responsibility, and that great leaders serve... we lead by serving each other. We lead through our service." McConaughey defined service as "taking on responsibility today, so we can have more freedom tomorrow" and explained "it's making the better choice for you and for me," as well as how "it's the investment we make in ourselves."

McConaughey shared that he will "continue to work and invest the bounty I have by supporting entrepreneurs, businesses, and foundations that I believe are leaders, establishments that I believe are creating pathways for people to succeed in life, organizations that have a mission to serve and build trust, while also generating prosperity." He said "that's the American dream."

On politicians, McConaughey said that that "the good ones, can get us where we need to go, yeah, but let's be clear, they can't do anything for us, unless we choose to do for ourselves."

McConaughey had made certain policy comments earlier this month, such as about the Texas abortion law which bans most abortions once a fetal heartbeat is detected, at around six weeks, which he said "feels overly aggressive to me." He also came out against mandating the coronavirus vaccine for children.