It's On: Mark Meadows Is Defying January 6 Subpoena 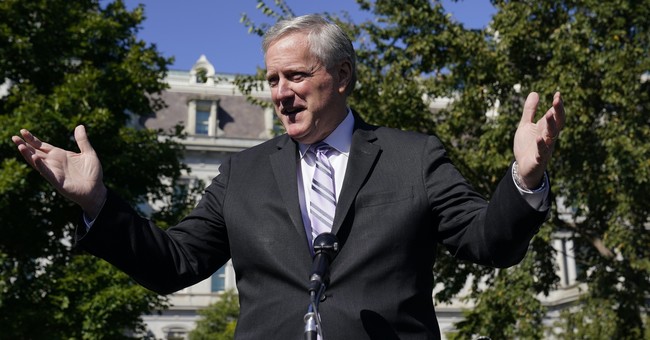 Last night, the U.S. Circuit Court of Appeals for the District of Columbia temporarily blocked the January 6 select committee from receiving documents from the Trump White House. The bigger news, though, was Rep. Bennie Thompson (D-MS), who is the committee's chairman, calling out former President Donald Trump's White House Chief of Staff Mark Meadows for claiming he was "duty bound" to defy a subpoena he was issued in September. Sure enough, the time for Meadows to present himself before the committee has come and gone and he's a no show.

As Rebecca Beitsch reported for The Hill:

Former Trump chief of staff Mark Meadows has failed to show up for a Friday deposition with the House committee investigating the Jan. 6 attack on the Capitol, according to multiple reports, despite a threat from the panel it would seek to hold him in contempt for any defiance.

Meadows was not seen entering the Capitol and his attorneys had indicated he would not appear. The committee did not immediately respond to request for comment from The Hill.

The committee has also not tweeted Meadows' failure to appear. The committee website also does not contain any statements. The latest tweet from the official account was from Thursday night and is a copy of the letter Thompson sent to Meadows' attorney.

A letter last month from Trump attorneys told advisers and others subpoenaed to not comply, citing executive and other privileges.

When it comes to the matter of executive privilege, though, there's a word of caution when it gets to the Biden administration getting too excited about the limits imposed on the previous president.

Writing in his memo for The Hill on Friday morning, Niall Stanage pointed out that the "Trump case could come back to bite Biden."

He said that this "could end up becoming a case of 'be careful what you wish for,'" in that a "ruling — and the case in general — could easily weaken the ability of a past president to protect confidential discussions. This, in turn, could have big real-world effects."

On the issue of executive privilege, he closed his piece by pointing out that "the current battle could echo far into the future — and snap back to hurt Democrats, including Biden himself."

Stanage also pointed out that the "the legal struggle [of executive privilege] is destined to end up before the Supreme Court."