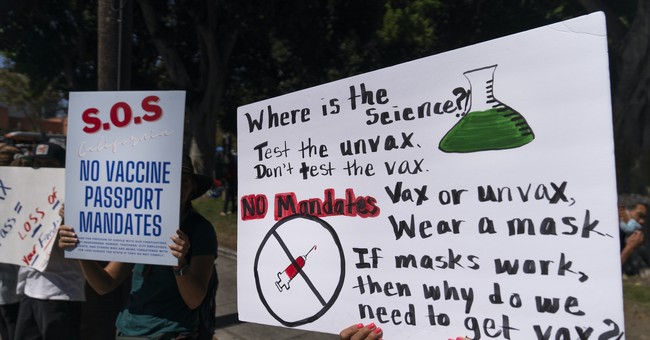 Last Saturday the U.S. Court of Appeals for the Fifth Circuit Court of Appeals issued a temporary stay against the Biden administration's vaccine mandate for private businesses with 100 or more employees. On Friday night, the court affirmed its decision, as reported by Dan Whitcomb for Reuters.

"The 5th U.S. Circuit Court of Appeals in New Orleans upheld the ruling despite the Biden administration saying on Monday that halting implementation of the rule could lead to the deaths of dozens or even hundreds of workers," Whitcomb wrote.

The mandate was set to go into effect on January 4, but employers, employees, organizations, and several states brought suit almost immediately.

One of the attorney generals involved in bringing the suit, Texas' Ken Paxton lauded the ruling over Twitter.

As did Louisiana's Jeff Landry, who also brought the suit.

During an announcement President Joe Biden made in November to mandate the vaccine for federal employees, there was also a warning that the administration would use the Occupational Safety and Health Administration (OSHA) to enforce such a rule on private businesses.

And, as Leah recently warned, the Biden administration is even looking for ways to try to impose the mandate further, such as on businesses with less than 100 employees.