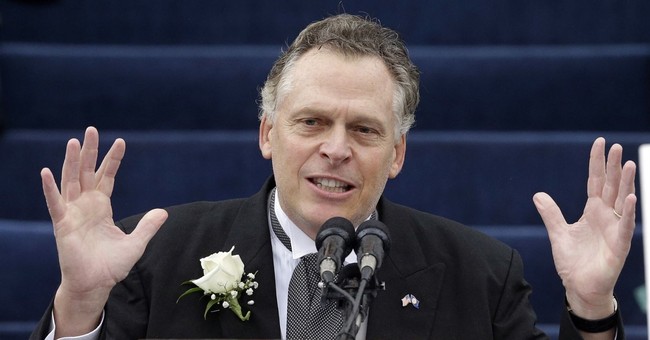 On Wednesday night, a video was shared showing Democratic gubernatorial candidate for Virginia, Terry McAuliffe, responding to a sheriff's concerns about defunding the police.

"On July 20 you accepted an endorsement from the New Virginia Majority. They are a large defund the police organization. They want to abolish prisons and ICE. You said you were proud to accept their endorsement," Montgomery County Sheriff Hank Partin's comment while at the Virginia Sheriffs Association conference.

Proud to be endorsed by @NewVAMajority. Together, we are going to keep Virginia moving forward. That starts with building a more inclusive Commonwealth that lifts up working people across Virginia. Onward! pic.twitter.com/TjCkewmor1

As Carson reported about the endorsement:

Despite claiming to promote “democracy, justice, and progress,” NVM advocates for the defunding of police, and the abolition of both prisons and the United States Immigration and Customs Enforcement (ICE). The group has consistently expressed these radical views on its Twitter page.

In the wake of last summer’s Black Lives Matter protests, NVM promoted a student activist who envisioned “a world without police.” In March, NVM cited an article that called the police “agents of white supremacy.” And in April, the group wrote that “incarceration is a human rights violation.”

Such is not the only group that supports defunding the police and has endorsed McAuliffe. He was endorsed by NARAL Pro-Choice Virginia, also in July.

The candidate and former governor also took a tone with Partin. McAuliffe was elected governor in 2013 and is running again in 2021 as the state constitution prohibits governors from running for consecutive terms.

"Have I ever supported defund the police? Are you out of your mind? I've invested in law enforcement. I just went through 25 minutes of telling you what I do for the police," McAuliffe declared, as he wagged his finger and raised his voice. "I've defunded? I've funded 'em!"

Sheriff Partin followed up with a question, as he asked McAuliffe "so you'll never support defunding them?"

Partin called McAuliffe's response "unbelievable" and noted that "I don't believe an answer to either one of those questions." McAuliffe shrugged and scoffed "well I don't care what you believe, and I'm proud of that track record."

In August 2020, when he was not yet committed to running for governor, WSLS 10 News spoke to McAuliffe, who stated he does not support defunding the police. Per McKinley Strother's report about the conversation:

Here’s his response to a question about the removal of confederate statues in Virginia and police reform: “The statues are coming down as they should have been coming down. I don’t support defunding the police. I’d like to see more money going to the police to deal with community policing activities. I’d like to see more money for mental health. Many of these police officers just don’t have the training to deal with these mental health issues. So, we need to be more community based.”

Sheriff Partin appeared on "Fox & Friends" on Thursday to discuss the exchange. Brian Kilmeade addressed McAuliffe's tone, asking the sheriff "were you surprised at the anger he showed towards you if he's so pro-law enforcement? Why is he so angry at you, sheriff, for asking?"

Partin acknowledged that McAuliffe is "angry at me, number one, because I have publicly supported his opponent who I believe will defend us and defend our commonwealth and keep our community safe. And that's what all the sheriffs want to do. But I got to tell you, it's been a tough year to, and we don't need anybody working against us."

??Over half of Virginian’s feel that crime is increasing ??

The crime rate increased by 43% under Political Boss Terry McAuliffe.

Now he wants a second term?

Virginia is less safe because of Terry McAuliffe and Virginia Democrats. No, thanks. https://t.co/O7PClApVNK

Proud of the 50 Sheriffs endorsements I received yesterday!

These law enforcement officers know that Terry McAuliffe does not have their back and will make Virginia less safe. pic.twitter.com/zUEwIz9McT

Sheriff Partin is featured in an ad from the Youngkin campaign, "Keep Virginia Safe."

I’ll always defend our law enforcement heroes, not defund them. It’s an honor to have the support of over 50 sheriffs from across the Commonwealth. Together, we’ll crackdown on crime. pic.twitter.com/JPM1YtTUTJ

The Virginia Police Benevolent Association also endorsed Youngkin after McAuliffe failed to meet with the group. As was reported last month:

McAuliffe has also snubbed police officers both during this 2021 campaign cycle, as well as when he was governor. McAuliffe did not meet with the Virginia Police Benevolent Association, which went on to endorse his Republican opponent, Glenn Youngkin. In September 2017, the Associated Press reported that "Sheriffs group: McAuliffe canceled meeting over endorsements," with the majority of sheriffs having had endorsed the Republican gubernatorial candidate for 2017, Ed Gillespie.

There has not been an incident where Youngkin has raised his voice when answering a question.

McAuliffe and Youngkin, will debate on Thursday night in Grundy, Virginia. The debate will air on C-SPAN.