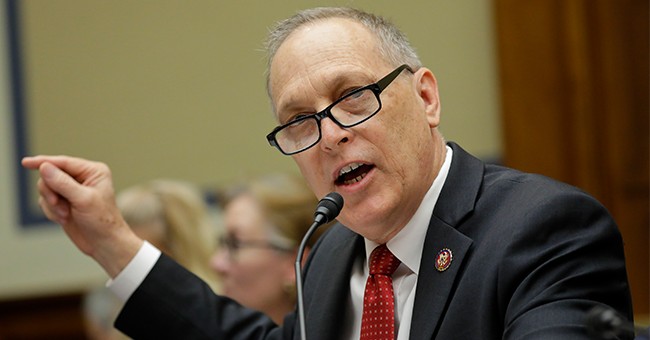 As Townhall has been covering, the Biden administration this week announced they would literally be going "door-to-door" to encourage Americans to get vaccinated. Such comments came from President Joe Biden himself, White House Press Secretary Jen Psaki and HHS Secretary Xavier Becerra. The negative reaction was strong and swift, and includes members of Congress. On Friday, Rep. Andy Biggs (R-AZ) and 31 other Republican colleagues sent a letter to Biden demanding answers.

I just sent a letter to Biden demanding answers on his door-to-door vaccine checks.

The fed gov has no right to track the private health information of Americans or to intimidate people into getting the vaccine.

The letter mentions privacy concerns and communicates the importance of letting Americans make their own medical choices. "Your administration's decision to go door-to-door to coerce individuals to receive a COVID-19 vaccine is deeply disturbing and violates the privacy of Americans. The private health information of millions of Americans should never be a matter of concern for the federal government. Americans must be free to make their own personal health choices," the letter begins.

Making reference to statements from Biden and Psaki, the letter also notes such "statements provoke a serious concern that the federal government is in the process of identifying and tracking the private health information of millions of Americans. There is no scenario where the federal government should be actively entering communities and traveling door-to-door to pressure Americans to receive a vaccine. COVID-19 vaccine information is widely available throughout the country, and Americans have every ability to decides for themselves whether or not they should receive a vaccine."

The president had said on Tuesday that "now we need to go community-by-community, neighborhood-by-neighborhood and often times, door to doors. Literally, knocking on doors." Psaki conveyed the same message, saying during a press briefing that "targeted community-by-community, door-to-door outreach to get remaining Americans vaccinated by ensuring they have the information they need about how safe and effective the vaccine is."

.@JoeBiden confirms he wants to "literally" go "door-to-door" to get people vaccinated.

So.. if a Biden bureaucrat knocks on your door, what do you do? pic.twitter.com/At5zNFUZrB

Health & Human Services Secretary Xavier Becerra made it quite clear during a Thursday morning appearance that, in his view, the government deserves to know vaccination status of individuals.

HHS Secretary Xavier Becerra: "It is absolutely the government's business" to know who has and who has not been vaccinated. pic.twitter.com/Kukod1zIUO

“The federal government has spent trillions of dollars to try and keep Americans alive during this pandemic," Becerra said during a CNN appearance on Thursday morning. "So it is absolutely the government's business, it is taxpayers' business, if we have to continue to spend money to try and keep people from contracting COVID."

In the face of pushback for the administration's plan to invade individuals' privacy, Becerra maintained that knocking on doors "has never been against the law."

"Knocking on a door has never been against the law, you don't have to answer," he said. "But we hope you do, because if you do we can hopefully help dispel some of those rumors that you've heard and hopefully get you vaccinated."

Questions asked of the president include:

1) What is the constitutional and statutory authority your administration is claiming to conduct door-to-door vaccine checks and track their private health information of Americans?

2) Has your administration developed a database to track which Americans have received a COVID-19 vaccine?

3) Has your administration developed a database to track which Americans have not received a COVID-19 vaccine?

4) Is your administration accessing database maintained by state, local governments, or private companies to determine who received a COVID-19 vaccine?

6) How does your administration plan to identify the homes of Americans who have not been vaccinated?

The letter asks for a response by July 23.