U.K. and U.S. Embassies Get Flak for Flying Pride Flag in the Least-Thought Out Place Imaginable 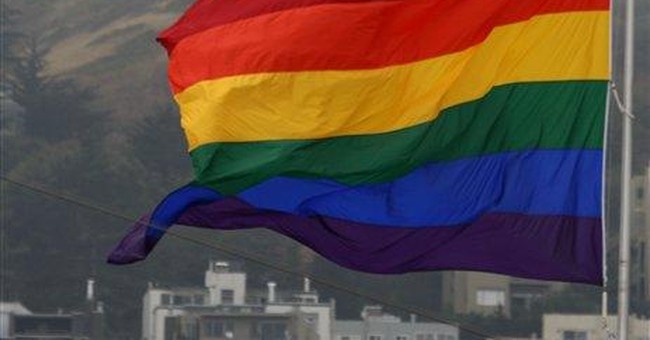 The Biden administration has an agenda when it comes to promoting the LGBT cause. It's an agenda which is fierce, but not always so well-thought out. That somebody wasn't thinking things through is really the only way to best explain why somebody thought it would be a good idea for the U.S. and U.K. embassies to fly the rainbow pride flag in, of all places, the Arab Gulf, where homosexuality is illegal and punishable by death. As Natasha Turak reported for CNBC, "U.S. and UK embassies in the UAE face backlash after flying rainbow pride flag in historic regional first." The UAE is actually one of the more liberal countries in the region.

On the anniversary of Stonewall, a milestone in the American civil rights movement, the U.S. Mission shows its support for the dignity and equality of all people. pic.twitter.com/vuc9RDzDs8

June is #PrideMonth and around the world we celebrate the equality and visibility of #LGBT+ people. Today, we are flying the rainbow flag to affirm our pride in the UK’s diversity and our values of equality, inclusion and freedom. #Pride2021 pic.twitter.com/dv3Lgl1SIV

As one more way in which the Biden administration stands in stark contrast from the Trump administration, Secretary of State Antony Blinken has not only allowed for other flags be flown on the same flag pole as the American flag, he's encouraged it. The rainbow pride flag isn't the only one, but the Black Lives Matter flag was flown as well, following the anniversary of the death of George Floyd.

In late May, around the time of that one-year anniversary and the start of Pride Month, which just came to an end, Republican members of Congress introduced the Stars and Stripes Act of 2021 which I reported on here.

As I mentioned in such reporting, an April report from Financial Times referenced this crucial information:

The internal State Department cable also noted that in some countries, a U.S. embassy flying the Pride flag, or discussing legalizing or decriminalizing same-sex relationships, could do more harm than good. Such measures could fuel a backlash against local LGBTQ communities themselves.

“Posts should support efforts to repeal [criminalization] legislation, while ensuring that ‘do no harm’ remains our overarching principle so U.S. efforts do not inadvertently result in backlash or further marginalization of the LGBTQI+ community,” the cable read.

Whatever one may think of an embassy flying a flag to celebrate something which is illegal in that country, the decision to do so in Arab Gulf countries goes against suggestions from that internal cable.

Very disrespectful from the British Embassy to the UAE & it’s people. Looks like someone there is still living the long gone UK imperial days https://t.co/yjjeE8CdWF

What were you snorting when you thought that making a statement like this was an act of prudent diplomacy in a land with values that diametrically oppose the freak-show of Western liberalism? Because I want some.

It was not just Twitter users who reacted in such a way, though. As Turak reported:

One member of the government, a senior Emirati official speaking anonymously, called the act “So strange.”

“The flag-flying. Why rub it in our faces? Why choose us to do this to?” the official told CNBC, requesting their name be withheld due to the sensitivity of the matter. The source questioned why there weren’t similar statements made by the embassies in every other Muslim country.