More and More Republican Women Are Running for House Seats 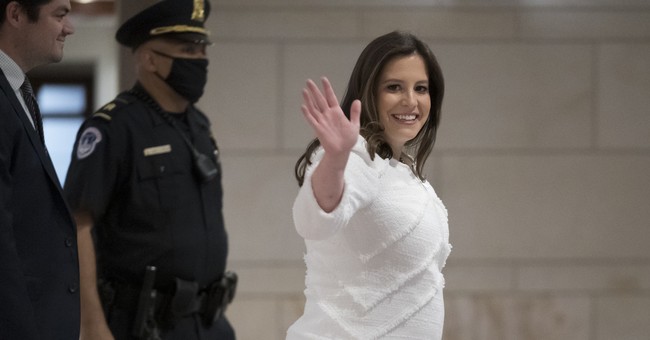 On Friday, Gabriel T. Rubin reported for The Wall Street Journal that "More Republican Women Plan Runs for House, Building on Party’s 2020 Wins." So far, 127 Republican women have already indicated they plan to run for House seats. That number was at 50 for about this point in the 2020 cycle. There are currently 31 Republican women serving in the House.

According to the NRCC, the 127 women have either filed with the Federal Election Commission or announced plans publicly.

Rubin's reporting acknowledges that Democrats have recruited and elected many more women to the House. While here are 31 Republican women in the House, there are 88 Democratic women.

"Far more Democratic women sought House seats—356—but that number was flat from 2018," Rubin noted. So while Democrats have more by way of women currently running and serving in the House, that number is staying the same. Republicans are realizing the need to grow from here, and are actually doing something about it.

Rep. Elise Stefanik (R-NY) acknowledged this after the 2018 midterm losses which brought the amount of Republican women in the House from 23 to 13. "We are at a crisis level of GOP women in Congress," she wrote. Historically, the party in charge of the White House loses seats during the midterm elections.

While Democrats maintained control of the House after the 2020 election, their majority is in the single digits. There was no such blue wave like some predicted. The GOP success to stave off such an overwhelming majority and a mandate from 2020, and the likelihood of success for regaining the majority in 2022 could very likely be attributed to the success of women.

"GOP women were some of the stars of Election Night 2020, accounting for 11 of the 14 Republican victories over Democratic incumbents. The number of Republican women in the House grew to a record 31 this year, more than double the 13 in the prior Congress," Rubin wrote in his opening.

Input from the NRCC is also mentioned. "The success of Republican women last year is one reason that a large field looks to be shaping up, said Michael McAdams, spokesman for the NRCC, the party’s main House campaign arm," Rubin included.

Republican women are also in positions of leadership. Rep. Stefanik is currently the third-ranking member as the chair of the House Republican Conference, and replaced another woman, Rep. Liz Cheney (R-WY), who held that role until May 2021.

Make no mistake: #GOPWomen will be the first ones through the breach to #FIREPelosi once & for all! #EPAC @NRCC #RedWave2022https://t.co/KYf9XPjnEV

The @WSJ reports that more Republican women have decided to run for the House in 2022 at this point than in any recent election cycle. https://t.co/ncmrfiYdb9 pic.twitter.com/9Wrb9aSNlP