Christian Baker Gets Chance to Tell His Story in Timely New Book Release: This 'Could Happen to Anyone' 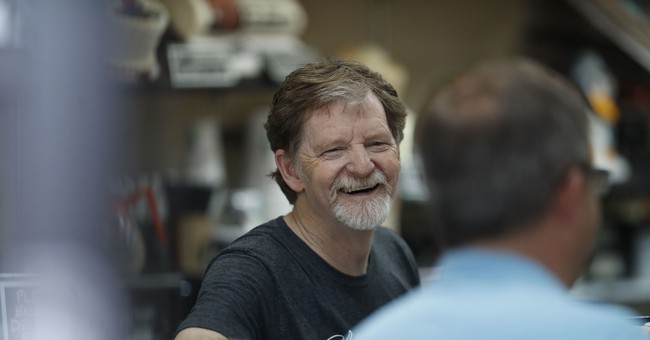 Jack Phillips, the Christian baker who could not create a custom-made wedding cake to celebrate a marriage between two men because of his sincerely held religious beliefs, has faced almost a decade onslaught of vitriol and countless legal proceedings. But there's a lot more to know about this devout Christian who wants to be able to serve everybody while living in accordance to his faith. Fortunately, readers get to know a whole lot more of Phillips, in his own words, with also a small section from his attorneys, in his book being released May 18, "The Cost of My Faith: How a Decision in My Cake Shop Took Me to the Supreme Court."

A couple of months ago I wrote about Jack Phillips being back in court, yet again, for his third Masterpiece Cakeshop case. This time it's in a suit brought against Phillips from Autumn Scardina, a transgender activist with a bone to pick.

While parts of the book are not entirely linear, it hardly creates an impediment for the reader. Rather, every chapter, arguably every page and every sentence, has a purpose so the reader can understand who Phillips is, in part because of these legal proceedings, but hardly exclusively.

Yes, Phillips is a deeply religious man. "Fair warning as you read: I quote a lot of Bible verses--not to sound holier than though," he himself acknowledges in the prologue, "but because those verses are the foundation upon which I’ve built my beliefs, my attitude, and my life. I didn’t do or say anything worth remembering on my own, and I didn’t make my decisions in a vacuum. This book is my testimony of how God led me, decision by decision, to where I am today."

While I myself am Christian, I found myself reading those opening pages and wondering if it would come across as too much. I was quickly proved wrong; the opposite is true. It serves to humanize Phillips.

You may think you know about this case, and, if so, you likely already have your opinions on it. It's so crucial that we go into hearing these stories with an open mind, especially if you don't agree with Phillips' position. You may disagree with the justices' 7-2 ruling, which "wasn't even a narrow 5–4 victory, which honestly had been the best I’d ever dared hope for," Phillips wrote. Well, you can thank the commission for this.

Diann Rice, a member of the commission actually said this. Worse, virtually every article on her has Rice doubling down:

Anyone reading that should be incensed for Phillips, as the man is neither a slaveholder nor a Nazi. Adding insult to injury, though, Phillips' father liberated Buchenwald, a particularly notorious Nazi death camp.

Phillips revealed as much as he could on a confidential settlement with the state in his second case to do with the commission. The members unabashedly doubled down on their bias against Phillips, publicly, and then claimed they could fairly rule. To anyone but the most hardened partisan, the commission members are the bigots.

The book is still a compelling one for those readers sympathetic to Phillips' cause. Readers learn about the ordinary man at the center of it, who did not ask for such fame, and who throughout gives God the glory.

They also get to learn about what led up to these cases, the cases themselves, and the workings of a Supreme Court hearing. The case was ADF attorney Kristen Waggoner's first before the Supreme Court, and she won. That chapter was particularly fascinating for the insight into how "very little about this case could be deemed 'routine.'"

In fact, the reader in me who craves tidbits like this was amazed to read that it was because of this case, where Waggoner only got out a sentence of her argument before being peppered with questions, that attorneys are now given two minute opening statements. Thankfully, Waggoner communicated the crux of their argument: "The First Amendment prohibits the government from forcing people to express messages that violate their religious convictions. Yet the commission orders Mr. Phillips to do just that."

When it comes to the comments from Rice, the justices were not pleased, particularly Justice Anthony Kennedy, "unrelenting," as Phillips wrote.

Not only did Justice Kennedy write the opinion, referencing the commission by name in that it "was neither tolerant nor respectful," and had not treated Phillips equally. Phillips lays out the two main takeaways from the opinion:

Kennedy wrote that “the record here demonstrates that the Commission’s consideration of Phillips’ case was neither tolerant nor respectful of Phillips’ religious beliefs.” In fact, as Kennedy pointed out, the Constitution requires representatives of the government—such as the Colorado Civil Rights Commission—to be both of those things when faced with a person’s religious convictions.

“Government has no role in deciding or even suggesting whether the religious ground for Phillips’ conscience-based objection is legitimate or illegitimate,” Kennedy said. In other words, the commission overstepped its bounds when it deliberately and aggressively went after me for my faith in Christ and the truth of the Bible. That disrespect for my beliefs, Kennedy indicated, was a major reason why he and his colleagues ruled in my favor.

A second element was also crucial to the case: the commission’s decision to treat me differently than the other cake designers who, like me, had opted not to design custom cakes because they couldn’t agree with the message requested.

Kennedy brought up those three other cake designers who declined to create cakes expressing opposition to same-sex marriage. He wrote about how the commission had rejected my choice and my reasons while embracing theirs—even though our rationale was identical. The commission had upheld their rights to choose which messages to express through their creations, while bluntly denying me those same rights. That disparity—and hypocrisy—had prompted Kennedy and most of the other justices to rule in my favor.

In the first two cases Phillips faced, the attorneys opposing him fared poorly. In a chapter aptly titled "A Lively Day in Court, to do with the second Masterpiece Cakeshop case, Judge Wiley Daniels--a Bill Clinton appointee-- chastised Colorado lawyers for "wasting [his] time" after he had already told them "you are not listening to me."

It's worth emphasizing that Phillips doesn't hate, not those who bring suit against him, not the commission members, or anybody else. That being said, it still does feel to like they got their just desserts for all that they subjected Phillips to, even after the highest court in the land ruled in his favor. Sadly, Phillips does have to point out in that chapter why it was that what the Supreme Court ruled was not just taken as gospel, even though Masterpiece Cakeshop has been cited in more than 80 cases:

Like most Americans, I’d assumed that once the Supreme Court ruled on something, it was set in stone. I took it for granted that all state and local governments around the country would come to attention, salute, and respect the court’s decision. It hadn’t occurred to me that some government officials, like those on the commission, might just opt to ignore or look for ways around a ruling they didn’t like.

Phillips has been carried by his faith, and readers can be rest assured that it will continue to carry him through whatever comes.

That is probably the most important thing I’ve learned: how good God is. I knew He was good before all of this happened, but coming through oppressive days, enduring the death threats, the hate mail, the obscene phone calls and public demonstrations, seeing the tears of my wife and the worries of my children, hearing people call me a bigot and a Nazi, listening while elected officials openly mocked the deepest convictions of my soul—let me assure you, this is when God’s mercies abound. This is when He comforts us in the deep places of the soul that only He can reach.

A press release released on May 18 described the book in part by relating it to an overall, modern day fight for religious freedom, with original emphasis:

The Cost of My Faith is Jack’s firsthand story from the frontlines of a legal battle that is just one piece of a larger culture war against Christians who claim their right to freely exercise their religious beliefs. Jack’s stand and the U.S. Supreme Court’s decision in his favor have better secured every person’s right to live consistently with their core beliefs without fear of government punishment or hostility—no matter whether or not you agree with Jack’s beliefs about marriage. And that is a good thing for freedom. But for Jack’s stand and the U.S. Supreme Court’s bold defense of the Constitution, any one of us could have found ourselves one day facing government punishment simply for living according to our deepest beliefs in the workplace. That risk is intolerable to a free society, and it is one we must vigorously oppose at every turn.

"The Cost of My Faith" is a pleasant read, in part because it is perfectly paced with the perfect length. The book will be available on Tuesday. "The thing that I hope readers will take away from The Cost of My Faith is that if this extraordinary situation could happen to an ordinary guy in a small business, it could happen to anyone," read a statement provided to Townhall.