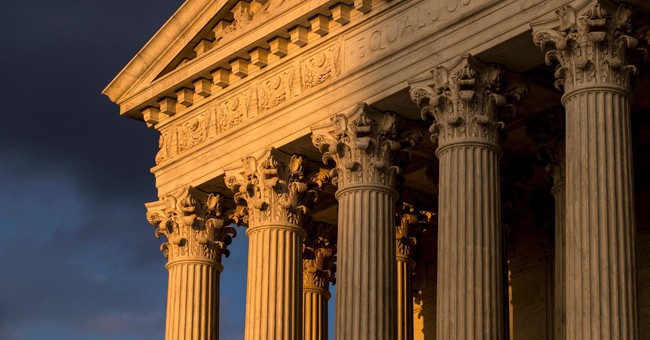 The Supreme Court has ruled 7-2 in favor of Colorado baker and devout Christian Jack Phillips, who declined to bake a wedding cake for a same-sex couple five years ago due to deeply held religious objections. Justices Kennedy, Roberts, Alito, Breyer, Kagan, Gorsuch and Thomas ruled in favor of Phillips, with Ginsburg and Sotomayor dissenting. Justice Kennedy wrote the opinion.

"The Commission’s treatment of Phillips’ case violated the State’s duty under the First Amendment not to base laws or regulations on hostility to a religion or religious  viewpoint," the ruling states. "The government, consistent with the Constitution’s guarantee of free exercise, cannot impose regulations that are hostile to the religious beliefs of affected citizens and cannot act in a manner that passes judgment upon or presupposes the illegitimacy of religious beliefs and practices."

"The laws and the Constitution can, and in some instances must, protect gay persons and gay couples in the exercise of their civil rights, but religious and philosophical objections to gay marriage are protected views and in some instances protected forms of expression," the ruling continues. "To Phillips, his claim that using his artistic skills to make an expressive statement, a wedding endorsement in his own voice and of his own creation, has a  significant First Amendment speech component and implicates his deep and sincere religious beliefs."

Oral arguments in the case were made in December and Phillips was backed by the Department of Justice.

The Department of Justice on Thursday filed a brief on behalf of baker Jack Phillips, who was found to have violated the Colorado Anti-Discrimination Act by refusing to created a cake to celebrate the marriage of Charlie Craig and David Mullins in 2012. Phillips said he doesn't create wedding cakes for same-sex couples because it would violate his religious beliefs.

The government agreed with Phillips that his cakes are a form of expression, and he cannot be compelled to use his talents for something in which he does not believe.

"Forcing Phillips to create expression for and participate in a ceremony that violates his sincerely held religious beliefs invades his First Amendment rights," Acting Solicitor General Jeffrey B. Wall wrote in the brief.

Many legal scholars are saying the ruling doesn't necessarily protect individuals on religious grounds from being forced to participate in same-sex marriages overall. They argue the Justices focused on the Commission's particular bias toward Phillips and the unequal application of Colorado anti-discrimmination laws against him, not strictly the issue of religious expression. Parts of Justice Kennedy's opinion backs up this analysis.

"The commissioner  even  went  so  far  as  to  compare  Phillips’ invocation of his sincerely held religious beliefs to defenses of  slavery  and  the  Holocaust.    This  sentiment  is  inappropriate  for  a  Commission  charged  with   the  solemn  responsibility of fair and neutral enforcement of Colorado’s anti-discrimination law—a law that protects discrimination on the basis of religion as well as sexual orientation," Kennedy wrote. "The  Court  cannot  avoid  the  conclusion  that  these  statements  cast  doubt  on  the  fairness  and  impartiality  of  the Commission’s adjudication of Phillips’ case."

"Colorado can treat a baker who discriminates based on sexual orientation differently from a baker who does not discriminate on that or any other prohibited ground.  But only, as the Court rightly says, if the State’s decisions are not infected by religious hostility or bias," Kennedy continued.

Masterpiece Cakeshop decision leaves open the possibility that anti-discrimination law, neutrally applied, could require bakers and others to provide services for weddings or other events to which they have religious objections. https://t.co/yNkQjhKPeI

#SCOTUS said the question of when (or if) someone's religious views might give them a right to deny services to gay people "must await further elaboration in the courts" and then basically tells people to treat one another decently. pic.twitter.com/uZM9NYGZyT