Does Biden Hate the Police? You Have to Wonder with His Updated Proclamation 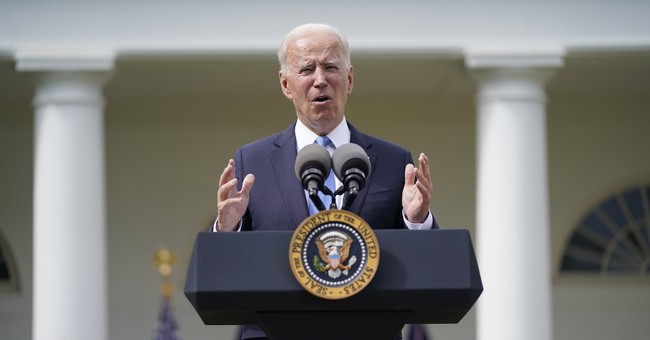 Saturday concludes National Police Week of 2021. While Biden had initially planned to fly the flags at half-mast today--which should be expected of him--he quietly changed his mind in an update to the original proclamation. As Landon reported, this comes after the president had already canceled former President Donald Trump's plan for the "National Garden of American Heroes."

Earlier this week Joe Biden announced that flags would be flown at Half Staff tomorrow to honor the men & women in blue who died in the line of duty. Today he "Friday news dumped" that he'd changed his mind: in his opinion, they aren't worthy of lowering the flags. Unacceptable! pic.twitter.com/LJHPp4Wxa0

Conservatives also used this week to call Democrats out for their defund the police mantra, as well as their hypocrisy for using police as private security, like Rep. Maxine Waters (D-CA), as Spencer reported.

All this week we honor our great men and women in blue for National Police Week.

While the Left works hard to defund the police, Republicans will ALWAYS back the blue & honor their service!

Thank you to the police who quietly put their lives on the line every single day.

I will always DEFEND the police and proudly #BackTheBlue ?? https://t.co/YgocVDzpXQ

Fund the police and the military.

Biden had a choice to make:

1) Stick with his original call for flags to fly at half staff to honor fallen police officers, or

2) Bend a knee to the Defund-the-Police crowd and back down.

Guess which one he chose. https://t.co/uBatjYbvaG

How long can the media cover up these crises for Biden?
Answer ??https://t.co/GHJcuxcuqN

While Democrats double down on their promises to defund the police, Republicans will always stand with the men and women in blue.

We are grateful for the law enforcement officers who are on frontlines every day keeping our families and communities safe. pic.twitter.com/VYGFFdeCB7

Democrats REFUSE to own up to their own push to defund the police, and Ted Cruz takes them to task.https://t.co/Y2zs8zJa9K

Rather than being honored for their sacrifice & service, our police are under attack like never before.

Thankful for the brave men and women who dedicate their lives to defending the thin blue line that keeps us safe.

I am committed to ensuring our police are supported and NEVER defunded. #NationalPoliceWeek pic.twitter.com/SJZJmOBo1C

When Democrats defund the police, our communities are LESS safe.

Last year was one of the deadliest on record for law enforcement. 394 brave officers died in the line of duty. This #peaceofficersmemorialday, we honor them and their families for making the ultimate sacrifice. pic.twitter.com/FwLTG63Hpc