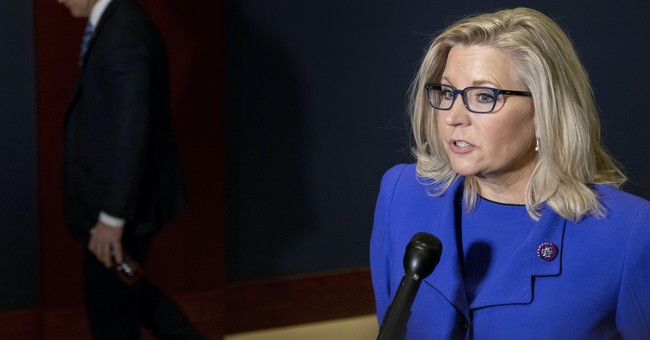 Rep. Liz Cheney (R-WY) has officially been relieved of her duties as House Republican Conference Chair. While there's some chatter as to who may replace her, with Rep. Elise Stefanik (R-NY) being one option, one thing for sure is that it's not Liz Cheney. The congresswoman has been embraced very much by the Left and has become a bit of a martyr for her crusade against former President Trump and the "Big Lie," which she has doubled down on to the max. Last week she had an op-ed published by The Washington Post and engaged in an impassioned floor debate last night.

Freedom only survives if we protect it. We must speak the truth. The election was not stolen. America has not failed. pic.twitter.com/H4KrMxkPdy

To some, that means she's for sure going to run for president, at least to former Republican Bill Kristol.

For those interested, here are the two segments in which @baratunde and I discussed with Brian Williams last night the subject of the GOP's ongoing attack on democracy and the rule of law and Liz Cheney's resistance. https://t.co/bNEwniiKj0

In lauding Cheney's speech and taking dig after dig at the Republican Party, the editor of the Bulwark offered what he thinks is "logical." Honestly, it's pretty hilarious:

I think she`s -- the logical outcome of speech tonight is to run for the Republican presidential nomination in 2024. And really put it to the test whether this party can be saved from not just Trump personally, but from trumpism. And from contempt for the rule of law, and from a dedication going forward apparently, to using any means to overturn a legit fair and legitimate election. So I think Liz Cheney has made herself the leader of the non-Trump, anti-Trump forces in the Republican Party. And as I say, the out -- not just for tomorrow, and not just for internal maneuverings in the House of Representatives, but she`s sounding like Ronald Reagan to Margaret Thatcher. We`ll see if others rally to her.

Ronald Reagan may very well be rolling over in his grave after such a comparison. He's the one who came up with the Eleventh Commandment after all, that "Thou shalt not speak ill of any fellow Republican." Cheney has done that against the leader of the party no less, all while she distracts from her mission to unify and fundraise for Republicans.

Matt reported last month that Cheney has thought about running for president, which he called "a good joke." Trump, who has likewise since doubled down on his animosity toward her, weighed in:

Liz Cheney is polling sooo low in Wyoming, and has sooo little support, even from the Wyoming Republican Party, that she is looking for a way out of her Congressional race. Based on all polling, there is no way she can win. She’ll either be yet another lobbyist or maybe embarrass her family by running for President, in order to save face. This warmongering fool wants to stay in the Middle East and Afghanistan for another 19 years, but doesn’t consider the big picture—Russia and China!

Love him or hate him, Trump has a point. As I recently reported, a poll of 415 Wyoming Republicans did not look good for the congresswoman. While she may no longer be a part of Republican leadership, Cheney is still in the House, and still has her constituents to answer to.

52% say they would vote against her regardless of who challenges her in 2022 and 65% view her unfavorably...https://t.co/GwjG1MOxRZ

Rep. Cheney's parting shot and headline grabber was her commitment to making sure Trump doesn't hold office again. If she's so against Trump, why is she stooping to his level rather than being the better person? Actually, she's worse than the former president in a way because she does so with a sense of righteousness.

Rep. Liz Cheney (R-WY) after being removed from GOP leadership: "I will do everything I can to ensure that the former president never again gets anywhere near the Oval Office." pic.twitter.com/0ehcfu0iEB

If either Cheney or Kristol goes off and starts their own party, good riddance. Kristol isn't even a Republican anyway. It's fine with so many of us if he has Liz Cheney, along with these other supposed 100 former so-called Republicans.