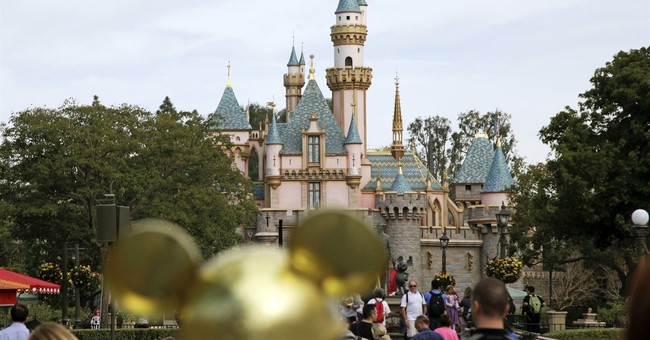 Disneyland re-opened last week after being closed for more than a year. But that happy news about the happiest place on earth was overshadowed by the horror of the updated "Snow White" ride there.

That "new problem" has to do with how the ride kept the ending of the original film viewers know and love. The opening says "Let's get this out of the way first: Snow White's Enchanted Wish, the revamped ride that replaced Snow White's Scary Adventures in Disneyland, is really good," which just rings hollow and makes the main complaint even more insufferable, with original emphasis:

The new ride includes a more comprehensive storyline — but that's also the problem. The new grand finale of Snow White's Enchanted Wish is the moment when the Prince finds Snow White asleep under the Evil Queen's spell and gives her "true love's kiss" to release her from the enchantment. A kiss he gives to her without her consent, while she's asleep, which cannot possibly be true love if only one person knows it's happening.

Haven't we already agreed that consent in early Disney movies is a major issue? That teaching kids that kissing, when it hasn't been established if both parties are willing to engage, is not OK? It's hard to understand why the Disneyland of 2021 would choose to add a scene with such old fashioned ideas of what a man is allowed to do to a woman, especially given the company's current emphasis on removing problematic scenes from rides like Jungle Cruise and Splash Mountain. Why not re-imagine an ending in keeping with the spirit of the movie and Snow White's place in the Disney canon, but that avoids this problem?

Dear God are these people thinking too hard on this. It's a ride of a Disney movie, one they themselves admit has "charm."

I think what we can agree on is that making this "a major issue" is what's that issue. What's "hard to understand" is that they have nothing better left to worry about. By asking "why not re-imagine an ending..." would be to change the ending. It might perhaps satisfy the woke crowd like Dowd and Tremaine, but would likely backfire on more sane Disney fans.

I’m sorry, this is what’s wrong with the world. Snow White, a fictional character getting brought back to life by a kiss by her future husband. Y’all taking things too far and ruining the gullible by making them believe this is what to flip out about instead of REAL issues.... https://t.co/KZhKfNiYSG

It's not limited to the United States, though. "Good Morning Britain" weighed in, with "a clash" between a dating historian and a relationship therapist.

A new Snow White ride at Disneyland has drawn criticism for kissing without consent.

Dating historian Nichi Hodgson and Relationship therapist Emiliana Silvestri clash over whether Disney should it be promoting kisses without consent?

What do you think? pic.twitter.com/3zULqYBlsQ

My new @DailyMail column is about Snow White, the heroic Prince's kiss that saved her life, and a sickening new woke campaign to leave her dead. Posting soon. pic.twitter.com/m1qWjkLP7b

The memorable title is consistent with the piece overall, including the closing where Morgan points out without the kiss, Snow White would remain dead. "You're pathetic & exhausting, and nobody in the real world agrees with you – about anything," he writes.