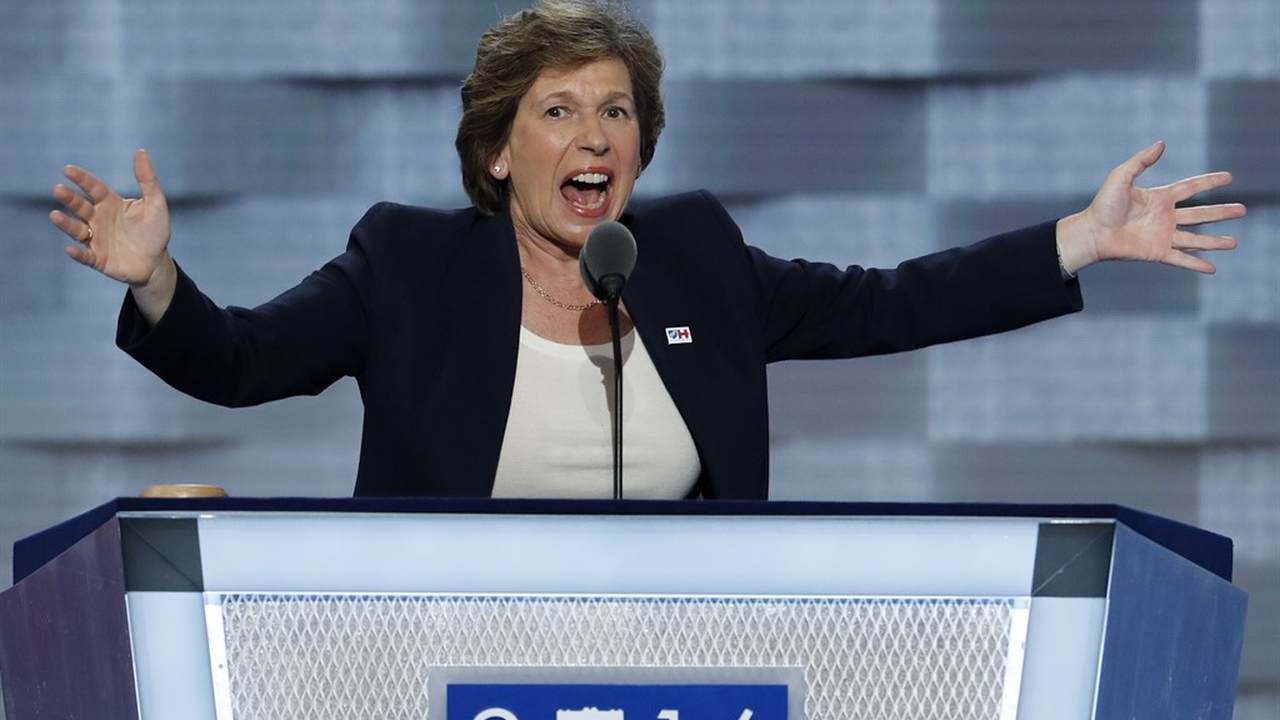 If you're looking for another reason to be turned off by teachers' unions, look no further than Randi Weingarten, the president of the American Federation of Teachers.

During a March 9 interview with the Jewish Telegraphic Agency, Weingarten said that "American Jews are now part of the ownership class. What I hear when I hear that question is that those who are in the ownership class now want to take that ladder of opportunity away from those who do not have it. Am I saying that everything we do is right? No. Are people in Los Angeles fearful? Yes."

The answer was highlighted in the interview's title and in the body of the article. There's no shying away from that. Here's the question and Weingarten's response in context:

I think some people are very skeptical of the power that they perceive teachers unions to have. They look at, for example, the ongoing struggles in Los Angeles, where they see this big dollar figure of aid being given for school reopening and are baffled by the perceived resistance of teachers to going back to work.

I have a very pointed response here for Jews making this argument.

American Jews are now part of the ownership class. Jews were immigrants from somewhere else. And they needed the right to have public education. And they needed power to have enough income and wealth for their families that they could put their kids through college and their kids could do better than they have done. Both economic opportunity through the labor movement and an educational opportunity through public education were key for Jews to go from the working class to the ownership class.

What I hear when I hear that question is that those who are in the ownership class now want to take that ladder of opportunity away from those who do not have it. Am I saying that everything we do is right? No. Are people in Los Angeles fearful? Yes.

One in three people have had COVID in L.A. The disease has significantly hurt Black and brown communities, many of whom are in the leadership of UTLA (United Teachers Los Angeles, the main teachers union). You have to meet fear with facts, just like you have to do about vaccine hesitancy. And that’s what’s happening right now, just like it’s happening all across the country. It had to happen in Chicago, it had to happen in Philly, it had to happen in Cleveland. And so we need to actually have this roadmap that works, working together, and talking to people about how we overcome this. And this is what I see in my union.

We just did a poll at the beginning of February: 88% of my members nationally — paraprofessionals and teachers — said that they were in favor of the AFT plan to reopen in-person learning with the mitigation strategies, the testing and vaccine access.

And 85% would feel comfortable being in school with that plan, including 73% of people who were still virtual. That gives you a sense of where teachers are. They’re scared. Seventy-one percent in the same poll said they were scared about bringing COVID home to their family. So we have to meet fear with facts. I wish we had 1/100th of the power the right wing attributes to us. We’d do a heck of a lot better job in actually educating our kids and focusing on excellence and equity.

I hear that. So you see it as a privileged argument?

Teachers are up against 40 years of the Chamber of Commerce and many other groups actually fighting to erode workers’ rights. Teachers are one of the few groups that are still organized.

I would actually argue that when teachers feel safe to go to in-person learning, that gives more assurance to parents than anything else.

Now there are groups that I disagreed with. There were some locals, not my own — remember I’ve said often that local unions are not monolithic and teacher unions are not monolithic. We’ve been clear about what the roadmap is. I do think in L.A. they had a point about saying that vaccines had to be a prerequisite because of the amount of COVID that was there.

But I thought that a local that said that we have to wait until kids get vaccinated, that was wrong. I mean, we’re still in the trials for children’s vaccinations.

The interview in question, "Randi Weingarten has a vision to get kids back to school — and strong words for Jews who say unions are the obstacle," was published earlier this month. That got the attention of The Jerusalem Post, Tristan Justice with the Federalist, and David Harsanyi with National Review. It would be nice to see more coverage, though. Batya Ungar-Sargon, the deputy opinion editor at Newsweek, also took to Twitter to denounce Weingarten.

American Jews: Why aren't teachers back in school? Poor kids are falling further behind every day.

Randi Weingarten: “What I hear when I hear that question is those who are in the ownership class now want to take that ladder of opportunity away from those who do not have it."

The decision to pander to public school teachers refusing to go back to in person learning cost poor children a year of schooling. Its repercussions on inequality will reverberate for GENERATIONS. Instead of taking responsibility, Weingarten accuses Jews of pulling up the ladder.

Such a reaction prompted this response, which Weingarten retweeted.

This is a gross distortion of what Randi said. She was talking about her disappointment when Jews don't support unions. Randi is a proud Jew who does her work out of her deep Jewish commitments.

Wait, what? How does this make it any better? You could say it makes it worse. Do you mean to tell me that some Jews decide not to support unions? Even though the president of the AFT is Jewish, and it would be to her "disappointment?" How dare they think for themselves?

As much as Weingarten wants to prop herself and the teachers' unions up, we've reported far too extensively on this to let such comments be the end all be all.

Teachers' unions are causing trouble in all sorts of parts of the country by refusing to return to in-person teaching in places like Oakland, Fairfax, and in parts of Massachusetts, all while, as we've emphasized, some schools have been safely operating in-person for months.

What's going on specifically in the above-mentioned Los Angeles is ridiculous, as Guy covered last month:

Elementary schools will open five days a week, but not for the full day, which is inexcusable and entirely untethered from any science.  But middle and high schoolers will have the pleasure of returning to classrooms...two days per week...to sit at desks, stare at computer screens, with headphones in, with a teacher at the front of the classroom virtually teaching different groups of students elsewhere.  What?!  Utter madness. It makes absolutely no sense.  It's remote learning five days a week. Students just happen to be located in different physical spaces every other day.

Weingarten went with that same "people are scared" line when on "Meet the Press" in February, as Cortney reported. A tweet from AFT criticizes concerns about the teachers' unions, like those from former Gov. Chris Christie (R-NJ) as "Republican talking points."

Teachers, staff, and the unions behind them are not a barrier to schools reopening. We are a barrier to staff and students being put in danger for Republican talking points. https://t.co/0nHKUl8e5p

Last month, I reported that the Centers for Disease Control and Prevention adjusted its guidelines recommending at least 6 feet of social distancing, to at least 3 feet of social distancing. Even though this was the CDC saying so, a press release attributed to Weingarten indicated AFT is "not convinced that the evidence supports changing physical distancing requirements at this time," as Guy reported on. Yet she sticks to her set talking points, all while repeating "we have to meet fear with facts."

Weingarten laments in her interview that "I wish we had 1/100th of the power the right-wing attributes to us." Stop being a martyr, then, and do something to actually get those kids back in school.