Teachers Union Boss: Sorry, But the Science Isn't Good Enough for Us to Reopen Schools 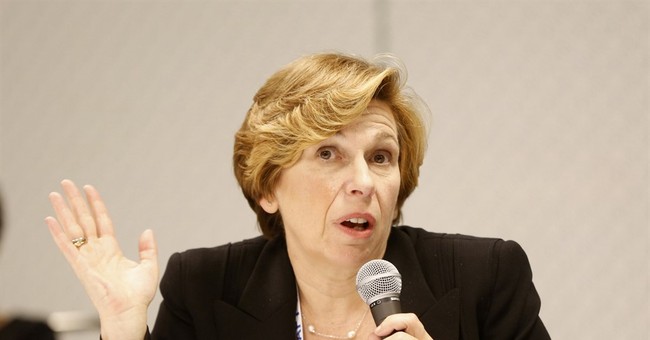 In recent days, the Centers for Disease Control and Prevention (CDC) finally adjusted its guidance about social distancing in schools to embrace three feet of separation between students as broadly safe, compared to the previous (mostly baseless) recommendation of six feet. In doing so, the CDC belatedly adopted the analysis its new director had offered to school officials in her own community last summer. Some teachers' unions were exploiting the prior "six feet" guidance as an excuse to further delay the return of full-time, in-person instruction, citing insufficient physical space to do so. That rationalization is no longer viable, so now what? More science denial, that's what. Here's a major national union boss flat-out rejecting the science in order to keep the ongoing anti-child racket afloat. CBS News reports:

The nation's second-largest teachers union sent a two-page letter to the Biden administration on Tuesday questioning the decision to reduce the recommended social distancing in schools to three feet between students...On Friday, the Centers for Disease Control and Prevention (CDC) reduced its recommendation for social distancing within schools to prevent the spread of COVID-19 from six feet to three feet, citing studies of limited virus transmission and similar recommendations from the World Health Organization and the American Academy of Pediatrics.  "These updated recommendations provide the evidence-based roadmap to help schools reopen safely, and remain open, for in-person instruction," CDC Director Rochelle Walensky said in a statement last week. But on Tuesday, Randi Weingarten, president of the 1.7-million-member American Federation of Teachers, told Walensky and Education Department Secretary Miguel Cardona that while she and her members "trust the CDC ... to provide them with accurate information," they have concerns about the recent changes. The letter was obtained by CBS News. "We are not convinced that the evidence supports changing physical distancing requirements at this time," Weingarten wrote. "Our concern is that the cited studies do not identify the baseline mitigation strategies needed to support 3 feet of physical distancing."

If anything, the CDC is overly cautious in its guidance. This change is supported by lots and lots of data, including data from the many schools that have been safely open for months – which the denialists obstinately avoid, as their widespread and successful existence crushes increasingly feeble and embarrassing arguments from the holdouts. But the union says they "are not convinced" by any of it, rambling about "baseline mitigation strategies." To repeat, millions of kids have been attending in-person classes, five days a week, since the fall – and have done so with an array of mitigation strategies that have worked well, in a wide array of facilities, in a wide array of environments. There is no excuse whatsoever to hold other students out of classrooms, and no basis for questioning this science. Weingarten and company are behaving as if all of this is still hypothetical and risky; it's neither. If the "we are not convinced" line isn't offensive or arrogant enough, consider this follow-up:

Weingarten also indicated in the letter the ~$122B sent to schools thru Biden's Rescue Plan may not be enough to implement changes.

"Districts lack the human resources and institutional planning ability to make changes
like this quickly."

Incredible. The Democrats passed more than $120 billion in "school funding," pretending that it was necessary to re-open schools, hoping no one would notice that (a) tons of schools have managed to stay safely open without stacks of federal cash, (b) there were still roughly $60 billion in unspent dollars earmarked for schools sitting around from previous bipartisan relief bills signed by President Trump, and (c) within the new gigantic tranche of unnecessary money, the vast majority of it won't even start to be spent until 2023, and therefore plainly has nothing to do with getting schools open during the pandemic. Despite this, this union boss has the temerity to suggest that all of that money still isn't sufficient for the holdouts. Think of all the planning, and how "quickly" all of this is happening, she disingenuously laments. They've had months and months to plan. Many other schools figured it out over the summer and made it work, and their students are vastly better off for it. Weingarten's complaints are almost unbelievably insulting. This is accurate, if a bit too kind:

Shifting the goalposts indefinitely = part of the political playbook of the teachers’ unions, now breaking with the CDC guidance. https://t.co/TYSA72ISYE

Noah Rothman points out that Weingarten embraced CDC recommendations when they supported her goals of keeping teachers out of classrooms (may I remind you this is a union comprised of people whose entire job is to be in classrooms), but is suddenly not so sold on the CDC science, now that it forecloses one of the remaining, flimsy excuses to keep schools from opening. This is anti-science hackery and anti-student abuse. Some anti-learning apologists continue to insist that parents aren't comfortable with a full return to in-person classes either. Actions speak louder than cherry-picked polls – via a deep blue suburban district outside of DC:

ABC7-DC: 99% of Falls Church city elementary school parents opted for 5-day in person learning, which is beginning in two weeks.

If you're looking for data on suburban Dem sentiment...

One potentially beneficial outcome of Covid lockdowns is an embrace of school choice at all levels, and in every way (going to private school, increase in charters, public/private vouchers, ad hoc pods, you name it). https://t.co/Q5xVt4HiCf https://t.co/oqFzqqDzkB

Every parent should be given resources to choose an educational path other than union-dominated, anti-science, anti-child government school districts that have failed far too many families over the last seven months.