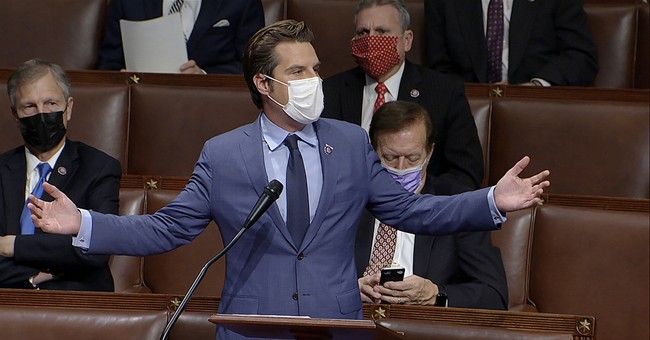 Details keep coming out to do with the DOJ investigation involving Rep. Matt Gaetz (R-FL). On Thursday night, Katie Benner and Michael S. Schmidt of the New York Times reported that "Justice Dept. Inquiry Into Matt Gaetz Said to Be Focused on Cash Paid to Women." As Katie noted in her reporting from Tuesday night, the New York Times was the first to report that Rep. Gaetz was under investigation from the DOJ.

A Justice Department investigation into Representative Matt Gaetz and an indicted Florida politician is focusing on their involvement with multiple women who were recruited online for sex and received cash payments, according to people close to the investigation and text messages and payment receipts reviewed by The New York Times.

Investigators believe Joel Greenberg, the former tax collector in Seminole County, Fla., who was indicted last year on a federal sex trafficking charge and other crimes, initially met the women through websites that connect people who go on dates in exchange for gifts, fine dining, travel and allowances, according to three people with knowledge of the encounters. Mr. Greenberg introduced the women to Mr. Gaetz, who also had sex with them, the people said.

Reporting also notes that "Mr. Gaetz denied ever paying a woman for sex." Further down in the article is this crucial point:

No charges have been brought against Mr. Gaetz, and the extent of his criminal exposure is unclear. Mr. Gaetz’s office issued a statement on Thursday night in a response to a request for comment.

CNN also published an unrelated piece on Thursday, that "Gaetz showed nude photos of women he said he'd slept with to lawmakers, sources tell CNN." The fourth paragraph into the piece reads that "There's no indication these pictures are connected to the DOJ investigation."

Rep. Gaetz's most recent tweet, from Thursday afternoon, emphasizes that his family is being extorted as does a pinned tweet from Wednesday.

The allegations against me are FALSE.

The extortion of my family by a former DOJ official is REAL.

DOJ has the tapes.

Exposing the plot to use lies to extort my family. via @thedailybeast https://t.co/1VF7oVOYQq