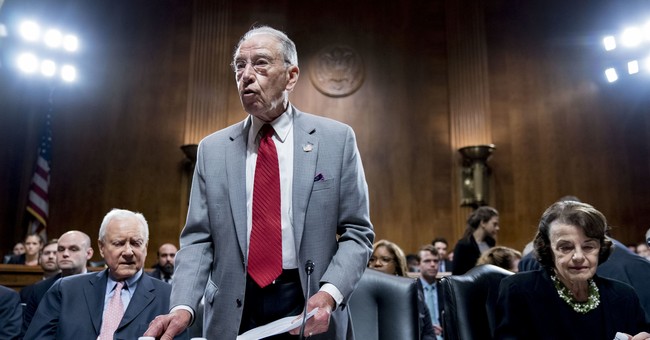 Iowa Senator Chuck Grassley (R-IA) formally announced on Friday that he will seek reelection in 2022 for his eighth consecutive term in office. His announcement brought much praise from Republican lawmakers, including Senate Minority Leader Mitch McConnell (R-KY), who lauded his colleague’s “inspired service.”

"Senator Grassley's decision to continue his inspired service for the people of Iowa in the United States Senate is fantastic news for our country. Senator Grassley's trademark sense of tenacity has long been on display, from his renowned 99 county tour to the nearly 9,000 consecutive votes he cast in the Capitol – by far the longest such streak in Senate history,” McConnell said in a statement from his campaign. “A work ethic that would be remarkable for most is merely routine for my good friend. And so, along with Iowans in every corner of the state, I am delighted that my distinguished colleague will seek another term – and grateful we'll continue to benefit from his tireless leadership."

Not many people know this, but Chuck Grassley continued his 4 a.m. runs *while he had COVID.*

Iowa and America are lucky that he's going to stay in the Senate! https://t.co/RFP5ZNBrJZ

Great news for the people of Iowa and the U.S. that Sen. @ChuckGrassley will seek reelection in 2022.

I have served with Chuck my entire time in the Senate. He is one of the most hardworking, enthusiastic senators I have ever met with a wealth of experience and knowledge.

With Senate candidates like Chuck Grassley and a sharp focus by the party and its leaders on winning majorities in the House and Senate – 2022 will be a terrific year for Republicans.

It’s time to look forward, not back.

Grassley's Democratic challenger, Abby Finkenauer, was defeated by Rep. Ashley Hinson (R-IA) in 2020 for the state's first congressional district. While mounting a long-shot challenge against Grassley, she likened the incumbent to the "DC elite."

@ChuckGrassley has spent 47 years with the DC elite, lining his own pockets while families like mine back in Iowa have been left behind.

Now, he’s running yet again to put Pharma over our seniors, Wall Street over working people, and monopolies over small businesses. https://t.co/eRHiOriS2i

Meanwhile, Grassley has the challenger beat by 18 points according to a recent Des Moines Register poll.