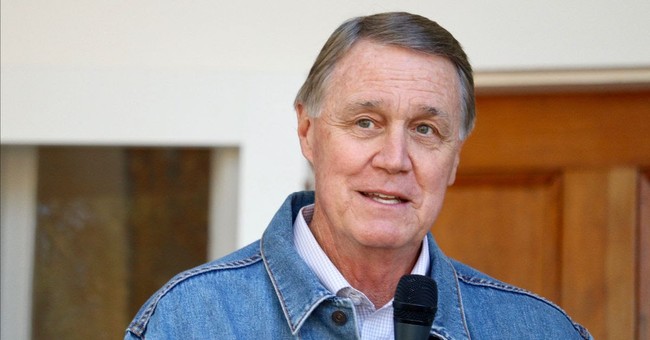 Former Georgia Senator David Perdue (R-GA) announced on Tuesday morning that he will not launch another bid for the upper chamber, after much speculation of a possible comeback. Perdue filed legal paperwork with the Federal Election Commission (FEC) to explore a bid against Senator Raphael Warnock (D-GA), who just recently unseated former Senator Kelly Loeffler (R-GA) in one of two runoff elections in January. Perdue ultimately lost to Senator Jon Ossoff (D-GA), who will hold a 6-year term in the Senate.

Perdue said once again that Georgia is “not a blue state” and that he is confident that the Republican who ultimately clinches the nomination will take the seat back. He argued that "two currently liberal US Senators," Warnock and Ossoff, do not represent Georgians' broader views.

“As we saw in my race in November, Georgia is not a blue state. The more Georgians that vote, the better Republicans do," Perdue wrote in an email to supporters. "These two current liberal US Senators do not represent the values of a majority of Georgians.”

The former Senator expressed confidence in Georgia’s legislature to “correct the inequities” in the state’s election laws, to boost transparency and ensure that only legal votes are counted.

Warnock’s seat is a target of Senate Republicans on the 2022 map, as the party looks to take back the majority that was lost in January’s runoff elections in Georgia. Loeffler has not yet ruled out a run for her former seat, and former Congressman Doug Collins (R-GA) is also rumored to be mulling another bid. Loeffler recently rolled out a nonprofit aimed at engaging and mobilizing conservative voters in Georgia ahead of the midterm elections.