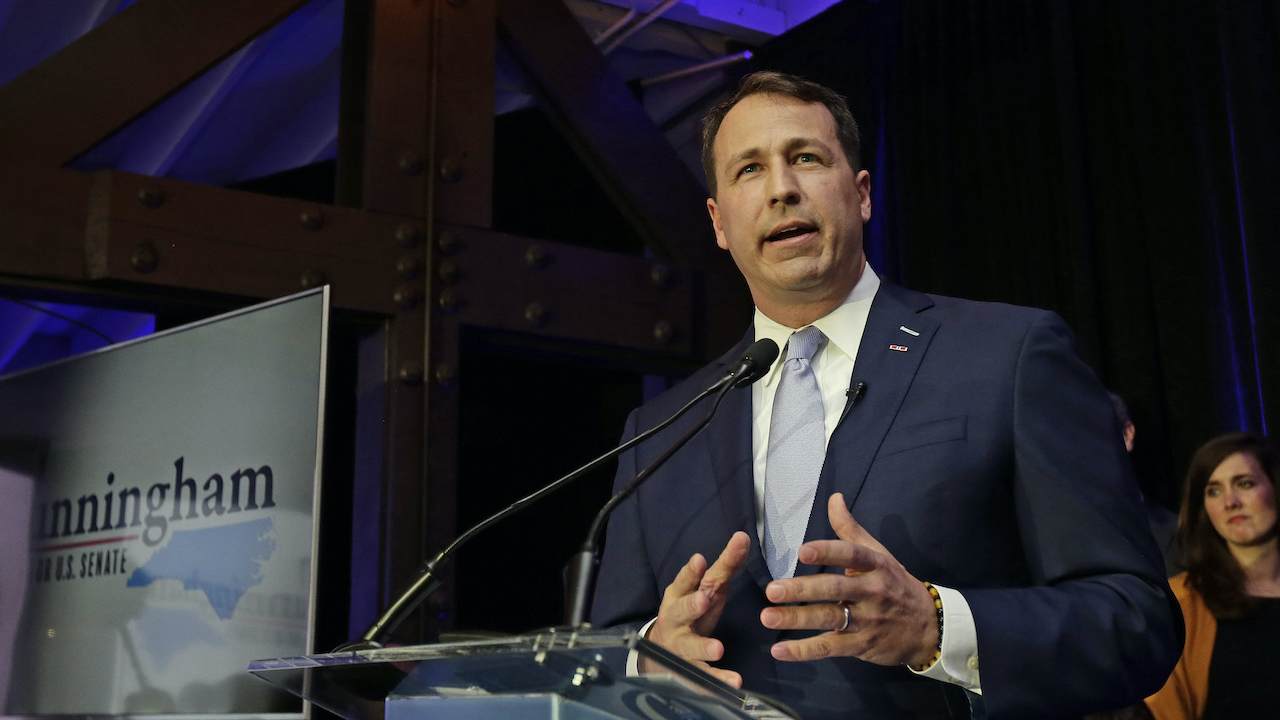 Democratic Senate candidate Cal Cunningham, who seeks to unseat GOP incumbent Thom Tillis (R-NC), is a favorite of Senate Minority Leader Chuck Schumer (D-NY) as the New York legislator has his eyes on a Democratic Senate majority in 2020. North Carolina’s Senate contest is a target of Democrats alongside Arizona, Colorado, Maine and Iowa.

A former state legislator and military veteran, Cunningham touts his moderate views, after beating an ally of Sen. Bernie Sanders, state senator Erica Smith, in North Carolina’s Senate primary; such a radical progressive would not win a statewide election in North Carolina, as both Cunningham and Sen. Schumer know well. Despite presenting himself as a moderate, as Democrats hope for a momentum boost in battleground states from voters opposed to President Trump, Cunningham participated in a “Call to Action” event hosted by far-left interest group SwingLeft on Saturday.

This progressive group is far from moderate by any reasonable measure; SwingLeft enthusiastically supports radical policies such as the Green New Deal, which Cunningham has avoided throwing his direct support behind:

The Affordable Care Act, the Green New Deal, voting rights in Florida, the Mueller report: There are so many reasons why we need to get Trump and his Republican enablers out of office. Revisit the news you missed in this week’s #WhatJustHappened. pic.twitter.com/8ZW8rP6WKM

SwingLeft is also allied with the infamous “Squad” in the House of Representatives, spearheaded by Rep. Alexandria Ocasio-Cortez, defending Rep. Ilhan Omar’s disgusting remarks that dismissed the terrorist attacks that occurred on September 11, 2001.

“I am not surprised at what Trump's doing, but I also know that we’re focused on making it better. Because we don’t leave the things that we love. And when we love this country, that means we propose the solutions to fix it.” —@AOC #RacistPresident pic.twitter.com/XZghiJqFVt

After winning a primary in which he was bankrolled by Sen. Schumer and Senate Majority PAC, Cunningham faces what is slated to be one of the most expensive Senate contests this cycle. The race is currently rated a “toss-up” by CookPoliticalReport, and the RealClearPolitics average shows Cunningham at an ever-so-slight advantage.