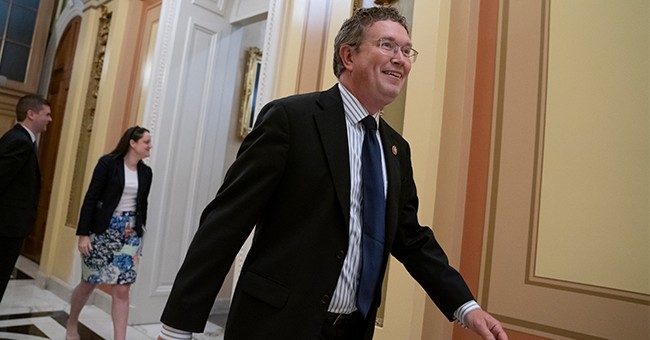 The House of Representatives is back in session, debating the economic relief package passed by the upper chamber to bring relief to American families. As Cortney wrote earlier, Rep. Thomas Massie (R-KY) intends to vote against the bipartisan package, preventing it from passing by unanimous consent and forcing colleagues to fly back to D.C. to ensure quorum in the lower chamber. Rep. Massie is notorious for his “principled” votes with spending, even during a global health pandemic.

President Trump weighed in on Rep. Massie’s sanctimonious rhetoric, which only delays the bill’s arrival on the president’s desk even further:

...& costly. Workers & small businesses need money now in order to survive. Virus wasn’t their fault. It is “HELL” dealing with the Dems, had to give up some stupid things in order to get the “big picture” done. 90% GREAT! WIN BACK HOUSE, but throw Massie out of Republican Party!

By empowering the Radical Left Democrats, do nothing Kentucky politician @RepThomasMassie is making their War on the 2nd Amendment more and more difficult to win (But don’t worry, we will win anyway!). He is a disaster for America, and for the Great State of Kentucky!

Safe to say Rep. Thomas Massie (R-Kentucky), a libertarian, will be the most unpopular person in the country today. Rs, Ds, the apolitical, nobody likes his decision to hold up this vote while forcing lawmakers to needlessly put themselves at risk to fly back for a voice vote. https://t.co/u8XLS5fmGf

The relief package is still set to pass the House by an overwhelming, bipartisan majority, and then will move to President Trump’s desk.