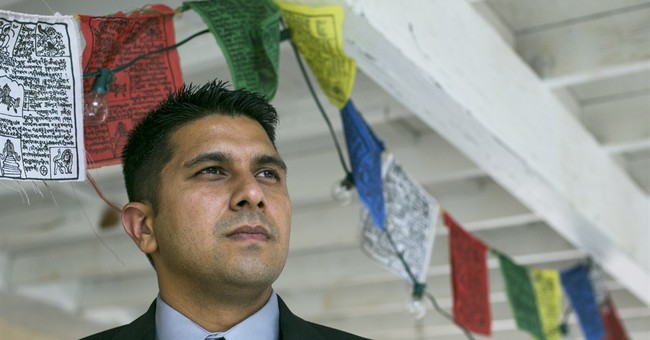 It turns out that Kaleka directed "Sirius," a conspiracy theory film that can only be described as absurd. Even the New York Times couldn't offer any praise for it. If you are in a masochistic mood you can watch the entire production here. The trailer, however, can speak for itself:

...The man behind this wants to beat Paul Ryan for a seat in government? Wow.

As Mother Jones reported, the film does not stop at alien conspiracies but goes on to dip into various insane theories about 9/11 and other historical events:

"The question, on some people's minds, is whether or not this disaster was exploited, or worse, engineered," the narrator says midway through the movie. He asserts that 9/11 was a false flag operation mounted by the government a few months after a major conference of alien watchers in order to distract the public and suppress the truth, and he likens the 9/11 attacks to the Gulf of Tonkin incident during the Vietnam War. The movie goes on to suggest that the Bilderbergers and Rockefellers were behind a series of global conspiracies.

Somehow, Kaleka has managed to raise more than $5000 via online crowdfunding for his doomed run. In the biggest understatement of the century, one news source describes the campaign as "unconventional."

Ryan is an eight-term Congressman with an extensive personal brand and impressive popularity. In the end, the most bizarre aspect of Kaleka's baffling candidacy is the fact that he is running at all.