The North Korean Defector's Escape was Caught on Camera 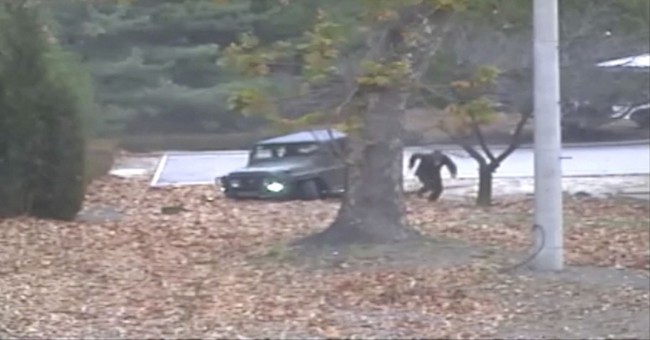 In the video, it appears that Oh tried to drive the vehicle off the road to escape but got stuck. After Oh exits the car, in a matter of seconds, four North Korean soldiers are on top of him and begin firing their weapons. One North Korean soldier appears to drop to the ground to get a better shot at Oh.

Though sustaining traumatic injuries, Oh made it to the South Korean side and was able to hide in a pile of leaves behind a retaining wall. The video also shows the rescue of Oh as allies drag him to safety.

Watch the dramatic video below.

As reported by Reuters, Oh was flown by a U.S. military helicopter to a hospital in Suwon where he underwent two successful surgeries. Despite initial reports which stated bullets tore through Oh's elbow and shoulder and caused traumatic intestinal damage, Oh is going to make it.

According to CNN, Oh lost 50 percent of his blood and doctors considered amputating one of his arms. They also stated that Oh would lose some motor functions due to the severity of his injuries. Doctors found something else that is quite disturbing. CNN reports, "Oh was also found to have dozens of parasites, some as long as 27 centimeters, in his ruptured intestines, which may be reflective of poor nutrition and health in North Korea's military."

Though experiencing severe pain, CNN says that Oh has been talking to doctors. For the most part, they discussed happier things. Oh enjoys music and "South Korean and American movies and television. Oh has particularly enjoyed 'CSI: Crime Scene Investigation.'"