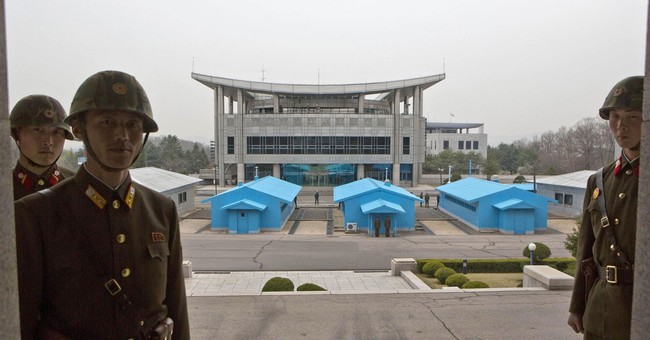 Update: The North Korean military defector is said to be in critical condition. What appeared to be minor injuries according to initial reports are far more severe. The Wall Street Journal has reported that, due to the path of the bullets through the man's shoulder and elbow, his lungs, intestines, and other internal organs are severely damaged. Though the soldier's surgery was successful, the soldier remains in critical condition and doctors are worried about the possibility of infections.

The North Korean military fired upon a fellow North Korean soldier as he raced to defect to South Korea, on Monday. The daring act paid off as the soldier made it across the demilitarized zone after being shot in the shoulder and elbow.

According to reporting from the New York Times, the soldier escaped through Panmunjom at a time when the U.S. and South Korean militaries are conducting naval exercises. In a show of strength and solidarity with South Korea, President Trump has deployed three U.S. Navy aircraft carriers to the region.

The soldier escaping from hardship in the north isn't the first one to successfully do so. The Times states:

Having North Korean soldiers tell South Korean investigators that they suffer considerable abuse at the hands of their fellow officers does not come as a surprise. Based on reports of public executions of civilians, one does not expect to hear that North Korean Dictator Kim Jong-un spares defenders of the regime of the same treatment. In August 2016, Un executed an education official after the official fell asleep during a speech Un was delivering.

Though a North Korean may succeed in defecting to South Korea and may be safe from harm, their family members may not be. In an article by The Telegraph on Saturday, a defector is begging for someone to save his family as they were apprehended in China trying to escape.

Hopefully, upon being asked questions by South Korean officials, this latest defector will be able to provide new information concerning North Korea's military and have a chance to have a better life.