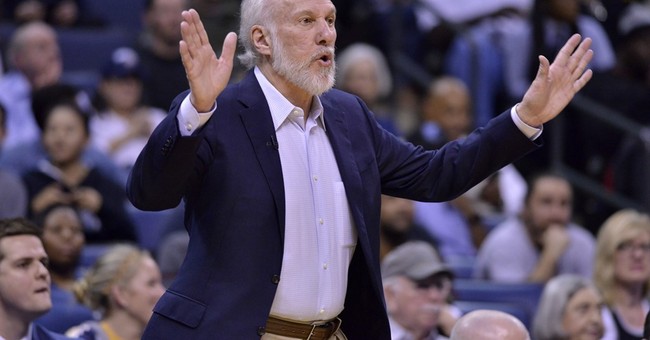 While President Trump has been putting pressure on the NFL to discipline players who take a knee during the nation's national anthem, an NBA coach is continuing to level sharp criticisms against the president.

Gregg Popovich, a future hall of fame coach who has led the San Antonio Spurs to five NBA titles, spoke out against comments President Trump made in the Rose Garden concerning the deaths of four U.S. Special Forces soldiers in the African country of Niger.

During the unscheduled press conference with Senate Majority Leader Mitch McConnell, the president told reporters that he had written letters to the families of the slain soldiers, adding that the letters had already been delivered or would be going out Monday evening. President Trump went on to state he would call the families of the soldiers but wanted to allow "a little time to pass" as to "call when it's appropriate."

What the president said next infuriated Popovich, a former airman who attended the United States Air Force Academy (USAFA) and served the required five years of active duty before becoming a part of the USAFA basketball team's coaching staff.

In regards to how former presidents handled the death of servicemen and women, President Trump stated:

If you look at President Obama and other presidents, most of them didn't make calls, a lot of them didn't make calls ... President Obama I think probably did sometimes and maybe sometimes didn't. I don't know. That's what I was told. All I can do is ask my generals. They'd write letters. And some presidents didn't do anything. But I like, I like the combination of - I like, when I can, the combination of a call and also a letter.

After hearing the president's comments, Popovich called Dave Zirin of The Nation where he unleashed his thoughts.

I've been disappointed by so much of what this president had said, and his approach to running this country, which seems to be one of just a never-ending divisiveness. But his comments today about those who have lost loved ones in times of war and his lies that previous presidents Obama and Bush never contacted their families, is so beyond the pale, I almost don't have the words.

But Coach Popovich didn't stop there.

This man in the Oval Office is a soulless coward who thinks that he can only become large by belittling others. This has of course been a common practice of his, but to do it in this manner - and to lie about how previous presidents responded to the deaths of soldiers - is as low as it gets.

President Trump's statement that "President Obama and other presidents, most of them didn't make calls, a lot of them didn't make calls" is easily fact-checkable. It's difficult to fathom why President Trump would make such a statement to unnecessarily pit himself against his predecessor when, at that moment, it was about grieving families. Former Obama aides are already calling the president's comments blatant lies.

This isn't the first time President Trump has received public backlash over outrageous statements regarding the topic of the military, and this time probably won't be the last. While at the 2015 Leadership Summit, then-candidate Trump, speaking about Arizona Sen. John McCain, said, "[McCain] was a war hero because he was captured. I like people who weren't captured." Months later, then-candidate Trump would be lambasted again for criticizing a Gold Star family who lost their son, Captain Humayun Khan, during the Iraq War in 2004.