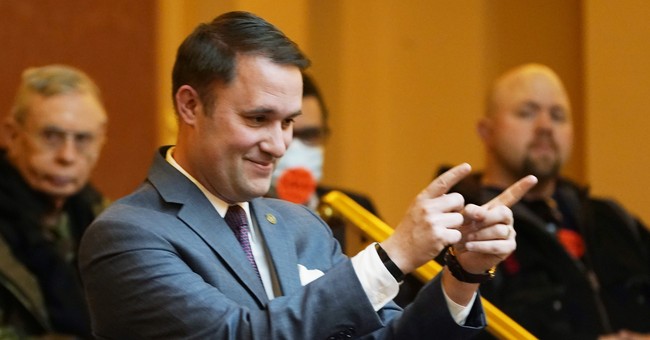 The Left is setting crisis pregnancy centers on fire, forming mobs outside the houses of Supreme Court justices, and firing at the office buildings of elected officials—but it’s the Right that’s the problem. That’s what the liberal media says. Conservatives didn’t burn down half the country in 2020. We didn’t attempt to hurl Molotov cocktails at police. We didn’t seize portions of Seattle. We love law and order. The Left does not. We’re not too fond of crime and crime-ridden hellholes. Liberal America adores them. And no—when we lost significant court battles, like Obamacare, we didn’t set fire to buildings. We didn’t riot. We didn’t open fire at the office building of elected officials.

In Virginia, someone fired some rounds through the window of Attorney General Jason Miyares’ office building. The incident happened on Monday (via NBC 12):

Police were called to the Barbara Johns Building at 7:13 p.m. on Monday, May 9 for a report of a bullet fired from outside.

The housekeeping staff found a bullet on the sixth floor of Attorney General Jason Miyares’s office.

According to police, one of the windows also had a small round hole near the top similar to a bullet hole.

Here’s the kicker—“there’s no indication that this incident was specifically targeted at the Attorney General’s office or any individual employee in the building.” Really, guys? This happened after the Supreme Court leak. The Court is primed to overturn Roe v. Wade in the Dobbs case according to this draft which has set liberal America ablaze. The Virginia AG is a Republican. There is only one party that’s being targeted like this—and it’s not liberal Democrats. Does the VA AG office have a lengthy history of having people shooting through its windows? It's not hard to see this was a targeted incident. It’s all about intimidation. The Left’s reaction to this draft has been to conduct a campaign of soft political terrorism against members of the Supreme Court, conservatives, and their allies. That was the sole purpose behind the leak.

Recommended
Biden Is Switching Midterm Strategies, and It's Really...Something
Guy Benson
Share this on Facebook
Tweet
Bill Maher's Take on the Supreme Court and Abortion Will Probably Shock You
Matt Vespa
What's With All These Democrats Stroking Out All of a Sudden?
Matt Vespa
Republicans Continue to Draw Contrast Between Democrats, Including with Hispanic Outreach
Rebecca Downs
Secretary Mayorkas: Title 42 Going Away Does Not Mean the Border Is Open
Julio Rosas
Media Matters Attacks Fox News Reporter for...Covering the Border Crisis