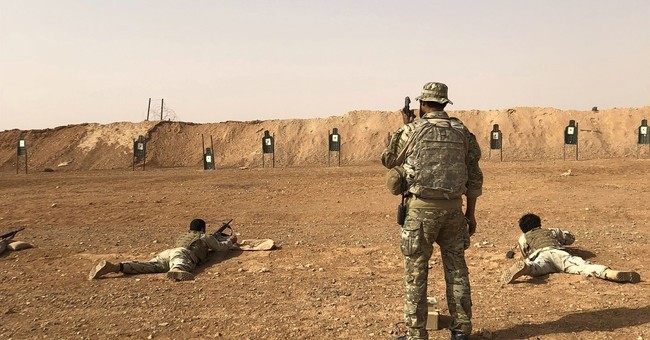 Are we ready to face the threats of the 21st Century? For the first time, I’m wondering that as the "woke" mentality has crept into the US Military. It's an institution that shouldn't be bombarded by, or even entertain, this left-wing political correctness nonsense for the simple reason that it's a total waste of time. Who cares about proper pronouns? These people are trained to find and kill our enemies. And yet, the Pentagon is adopting this mindset, and for what? We spend the most on defense than any other nation on Earth and we could have the most combat ineffective units around if this keeps up.

Russian President Vladimir Putin invaded Ukraine. We have an aggressive China eyeing Taiwan, and the US Military is holding training sessions on gender and pronoun use (via Free Beacon):

While Russia wages a full-scale invasion of Ukraine, the U.S. Army is putting its soldiers through training on gender pronouns and coaching officers on when to offer soldiers gender transition surgery, according to an official military presentation on the subject obtained by the Washington Free Beacon.

The mandatory presentation, "Policy on the Military Service of Transgender Persons and Persons with Gender Dysphoria," was given to officers earlier this month along with instructions for them to train their subordinates on the material. Portions of the presentation were provided to the Free Beacon by a whistleblower who was ordered to undergo the training as a high-ranking officer in the Army Special Forces.

An Army spokesman confirmed to the Free Beacon that the slides in question are part of "mandatory training" and come from an official program "used to train Army personnel on the recent changes to the DoD and Army transgender service policy." All Army personnel, from soldiers to commanders and supervisors, are required to participate in the training by Sept. 30, 2022, according to the spokesman.

The transgender presentation follows on a June 2021 announcement by the Army altering its policies so that transgender soldiers can openly serve. The shift in policy is part of a larger push by the Biden administration to make the military more welcoming to transgender people. These efforts have prompted pushback from Republicans in Congress and some within the military who view the policy changes as an effort to promote "woke" propaganda within the service. As Russia's invasion of Ukraine threatens to spark a larger conflict, military experts and insiders say they are concerned America's fighting force is prioritizing woke culture over protecting the American people.

Yeah, the latter is happening. It shouldn't. Again, it doesn't matter. None of this matters. We kill everyone. All our enemies, whether they be trans, non-binary, unicorns, men, women, gay—whatever. You die. When the full might of the American military is unleashed against our enemies, you usually die. Proper pronouns don't come into play at all.

When it comes to our own military training, how is this a priority? How is this training essential to the function of our armed forces? I'm worried about Chinese aggression. I'm worried about a more belligerent Russia as their socioeconomic standing degrades like their natural gas resources. Instead, we have these woke training sessions. Our military is increasingly unprepared for the dangers we face because prioritization of duties is absent.

Listen to the most recent episode of Triggered to get a special ONE-TIME promo code for 50% OFF a Townhall VIP subscription (valid until Friday, March 11)! You will get access to Triggered Uncensored, Matt's VIP columns, Kurt Schlichter's Unredacted podcast and Stream of Kurtiousness video series, and much more!