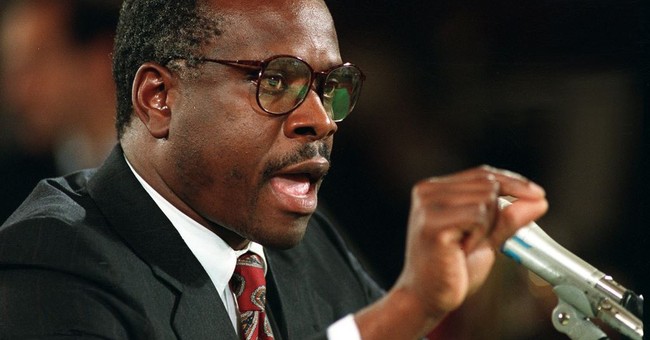 Since his confirmation, the Left has wanted to destroy Clarence Thomas. He’s conservative. He’s black. He’s smart. He goes against every liberal narrative that progressives have affixed to nonwhite Americans. This isn’t a new story. Clarence and his wife Ginni have been targeted for years. It’s the same talking points that go nowhere. At this point, it’s just a yelling exercise for the Left when it comes to Thomas. Mark Paoletta took a blowtorch to Jane Mayer’s hit piece in The New Yorker about the Supreme Court justice. It was a surgical dismantling. One of the core points made is that because Ginni Thomas is a conservative activist, Thomas must recuse himself in certain cases. Well, that’s just not true. That’s literal fake legal news. Paoletta's takedown is a lengthy one (via Federalist):

Mayer’s article, titled “Ginni Thomas’ Crusades: Is Ginni Thomas a threat to the Supreme Court?” is full of falsehoods and distortions, consistent with the malicious and error-filled book she co-authored in 1994, “Strange Justice: The Selling of Clarence Thomas.” Weaving together a mishmash of facts, conspiracies, and comments from dial-them-up liberal judicial ethics “experts,” Mayer argues that Ginni Thomas’ political activities and public comments on issues that come before the court require Justice Thomas to recuse himself from those cases.

She invents a new “recusal” standard that liberal judges don’t follow and misrepresents what other judges in fact do in facing the same situation as the Thomases. Call it Jane Mayer’s version of feminism in 2022: conservative women can’t speak out on issues when their husbands are judges.

It is well-established that a spouse’s separate political views or activities are no basis for such a recusal. In 2011, Judge Stephen Reinhardt, of the Ninth Circuit Court of Appeals and a liberal icon, properly refused to recuse from a challenge to the constitutionality of proposition 8 (regarding same-sex marriage) even though his wife was the executive director of the American Civil Liberties Union for Southern California (ACLU/SC), which had filed a brief at the district court level in this case, and despite his wife publicly expressing her views on the issue.

In fact, Stephen Gillers, whom Mayer cites as the gold standard for judicial ethics experts and who rips Ginni Thomas for “behaving horribly and hurt[ing] the Supreme Court and the administration of Justice,” filed a brief vigorously defending Reinhardt for not recusing…

In every example Mayer cites in her article where Ginni Thomas is involved with a group advocating a public policy position or making a filing in the Supreme Court, Ginni Thomas is not a “party” nor has an “interest” that would be substantially affected by the outcome of a Supreme Court decision.

In one example, Mayer even falsely claims that Justice Thomas attended a luncheon, Impact Awards. Ginni Thomas emceed the event where awards were given to conservative leaders. Mayer writes that a guest at the luncheon, Jerry Johnson, who was then the president of the National Religious Broadcasters, “later recalled that the Justice sat in front of him and was a ‘happy warrior,’ pleased to be watching his wife ‘running the show.’”

Mayer’s claim is 100 percent false. Justice Thomas was not at this Impact Award ceremony.

There are many more smears in this piece, the most snarky of which may be that Ginni Thomas failed to pass the bar exam. Mayer does not mention that Ginni Thomas passed it on her second try. Many others have failed on the first and passed on the second try, including Hillary Clinton, Kamala Harris, and Michelle Obama. But Mayer loves to smear.

Like Trump, when the Left gets fixated on someone they hate—it’s eternal. The Left will hate Thomas until the day he does, in the same way, they will always work to destroy Donald Trump. When something or someone gets under the Left’s skin, they will throw a tantrum that lasts a lifetime. The good thing is that the Thomas’ have thick skins. They must deal with all this nonsense. also, Thomas has always been one to give zero ‘you know whats’ about what people think of him. And you know the fact that he doesn’t allow the Left’s attacks get to him probably only drives these people more insane.

Editor's Note: The original post erroneously said that Mollie Hemingway penned The Federalist article. It was Mark Paoletta. We apologize for the error. The post has been updated.