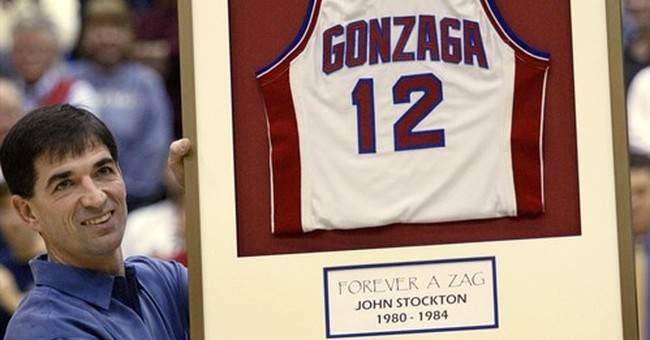 Former Utah Jazz point guard John Stockton can no longer watch basketball at Gonzaga University. Stockton, a former Bulldog, had his season tickets suspended because of his refusal to comply with the university’s mask policy for COVID. Stockton is one of the best to ever play the game. He holds records for the most steal and assists. He’s a 10-time all-star. He’s enshrined in the hall of fame. He and Karl Malone were a deadly duo back in the day when gas was cheap, the economy was booming, and wokeness was non-existent. Gonzaga canceled the man who is probably one of their most prolific alumni…because he refused to wear a mask which doesn’t do anything to stop COVID.

IF we’re talking about a nationwide program to make a custom-fitted mask for every American, fine—but even Fauci admitted the store-bought masks we all bought in bulk doesn’t curb the spread. It’s one of those things where it looks good on paper—and it’s true on paper, but its application is a bit messier.

Until Stockton complies, he can’t watch his alma mater play basketball (via ESPN):

Gonzaga has suspended John Stockton's men's basketball season tickets because of the Hall of Famer's failure to follow the school's mask mandate, he confirmed to The Spokesman-Review.

Stockton, whose No. 12 jersey is retired by the school, told the newspaper that he was informed of the decision by Gonzaga athletic director Chris Standiford. Stockton described the conversation as "congenial" but "not pleasant."

"Basically, it came down to, they were asking me to wear a mask to the games and being a public figure, someone a little bit more visible, I stuck out in the crowd a little bit," Stockton told the newspaper. "And therefore they received complaints and felt like from whatever the higher-ups -- those weren't discussed, but from whatever it was higher up -- they were going to have to either ask me to wear a mask or they were going to suspend my tickets."

Standiford declined to be quoted by the newspaper, instead issuing a statement that said: "We will not speak to specific actions taken with any specific individuals. We take enforcement of COVID-19 health and safety protocols seriously and will continue to evaluate how we can best mitigate the risks posed by COVID-19 with appropriate measures. The recent decision to suspend concessions in McCarthey Athletic Center is an example of this approach. Gonzaga University places the highest priority on protecting the health and safety of students, employees and the community."

Gonzaga requires proof of vaccination against COVID-19 or a negative test 72 hours before attending a sporting event. According to the newspaper, the school became stricter with its mask mandate after suspending concessions at the McCarthey Athletic Center.

Whatever the case, the school does have a solid basketball program. It’s elite. They usually make it into the NCAA tournament in March. Since 1999, they’ve made it in, and they go deep too with multiple sweet sixteen and elite eight appearances over the past decade-plus. Oh, and of course, there’s the final four. I will be rooting against them hard this season over their COVID hysterics.