Wait...So the FBI Lied About the Ending of the Texas Synagogue Hostage Situation 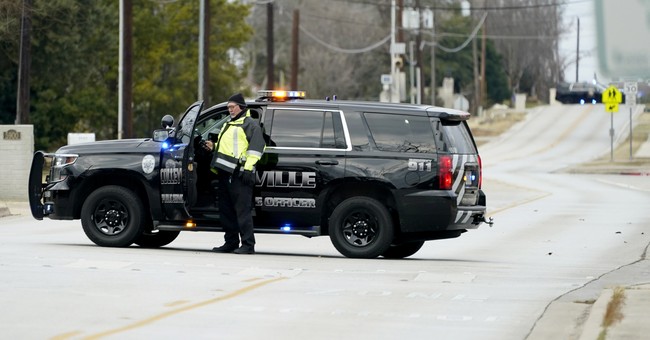 British national Malik Faisal Akram took four people hostage at Congregation Beth Israel synagogue in Colleyville, Texas. It lasted over ten hours. It had a good ending. All four hostages are alive and escaped injury. Akram is dead. Yet, we have new developments on how this whole saga ended. At least one was released, the other three were later released as well. That’s what was Initially reported.  Now, it seems like the rabbi created the situation in which the hostages were able to make a break for it. In other words, the FBI lied again. Our friends at Twitchy had the breakdown:

Incredible: "When I saw an opportunity where he wasn't in a good position, I made sure that the 2 gentlemen who were still with me, that they were ready to go... I told them to go. I threw a chair at the gunman and I headed for the door, and all three of us were able to get out." https://t.co/wJBRKoeKxn

This is also an example of why it's always worth waiting for the facts to come out in a breaking news story. Contrary to earlier reports, the Texas synagogue hostages weren't released. They escaped. Wonder what else we don't yet know. https://t.co/DTpmf3dXW0

So to sum it up, FBI let this guy in, let him get a weapon and let him get so far as taking hostages. Then, though they put on a show, the men saved themselves, no thanks to said FBI.
Useless outfit the FBI is.

The FBI already has egg on their face for suggesting that this attack might not have been related to anti-Semitism. Right, because synagogues have always been random targets for hooligans—said by no one ever. The FBI is sure Trump colluded with Russia, which was a Democrat-funded circus act grounded in zero evidence but not so sure that a leftist who tried to kill the entire GOP congressional baseball team in 2017 was politically motivated. The bureau also refused to investigate the horrid sexual abuse allegations lobbed against Larry Nassar by scores of American gymnasts possibly because they were too busy manufacturing fake evidence to support the shoddy Russian collusion myth. It’s clown town over there.

The FBI is biased. It’s corrupted. It’s a joke. Now, after being dragged by everyone who knows that 2+2=4, they say this attack was terror-related.