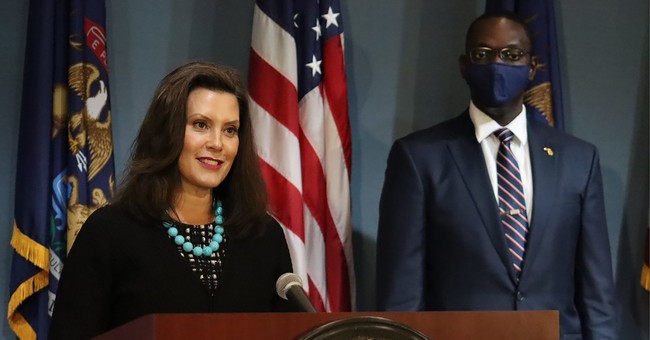 Source: Michigan Office of the Governor via AP

When she’s not the target of kidnapping plots hatched by FBI operatives, Michigan Gov. Gretchen Whitmer is burying COVID death counts. Yes, she took a page from Andrew Cuomo’s playbook on the number of COVID deaths from nursing homes. Now, the undercount is not as high as Cuomo’s but it’s significant. It could be between 30-40 percent. At a minimum, Michigan’s nursing home deaths are 30 percent higher than the initial total. I would say that’s an impeachable offense (via Fox News):

The report, which is expected to be publicly released on Monday, is likely to renew criticism of the Democratic governor's performance during the pandemic.

"And when we were looking into this to see just how deadly that policy was, the nursing home death numbers we received from the department weren’t including everything," Johnson said, confirming the number in the report was 30%.

Johnson said there are "some serious questions that have to be asked" about the alleged undercounting and that "it does appear the people of Michigan were misled as to just how many nursing home deaths there were" due to Whitmer’s policies.

"Seeing that it’s actually 30% higher is quite significant — we’re talking about thousands of lives that were not initially included in the department’s count," Johnson continued.

So, we talk about COVID misinformation all the time, right? What do we call this when the true death counts are being cooked to prevent a backlash? Like in New York, it was totally avoidable. A contagious virus that’s going to be allowed to flow freely in a facility where the elderly and the sick are housed. Are we shocked these places became killing fields? Forget COVID and the lack of vaccines at the time—we’ve said this before if any virus gets into a nursing home complex—everyone is getting it. Why would Democrats think any differently with this virus? The media gave these clowns plenty of cover to implement bad policy. The aftermath can now be seen for all to see which are piles of dead bodies—literally. Yet, Ron DeSantis is somehow the grim reaper or something.